This is a picture of our fish named Delilah: 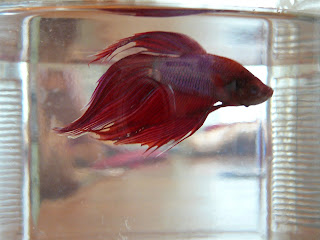 Our sweet little betta fish named Delilah died last Thursday night. We started to suspect she was ill a few days prior, and after a little bit of research we determined she was succumbing to a common betta fish disease called fin rot. Within a day or two, it became clear that she was getting worse very rapidly. The girls were refusing to look into her bowl the last day, as it was so sad to see her suffering so much. I tried to convince the girls that euthanasia was the kindest course of action, but they wouldn't let me do anything violent to her little body. We tried to think of the least traumatic method for both Delilah and us. My husband suggested putting her in the freezer, thinking the cold would actually numb any pain she was in and her system would just shut down. It turns out that Delilah's time had come naturally though, because when I went to relieve her of her suffering, I found she had already expired. Tears were shed, mostly of guilt, I think. Maybe if we changed her water more frequently, fed her more regularly, and so on, she'd have lived longer than one year in our care. Well, we buried her in the yard on Saturday morning and the girls are going to paint a small rock to place over her resting place so that we will always be reminded of our sweet little betta named Delilah.
And yes, she was named for the song Hey There, Delilah by The Plain White Tees. And everytime I walked past her bowl I would say, "Hey there, Delilah!" Really, I would. I'm going to miss that.
I think its not just the humans who will miss Delilah: 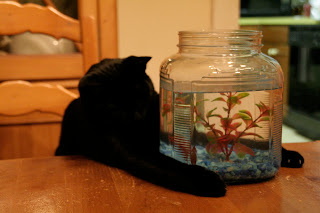 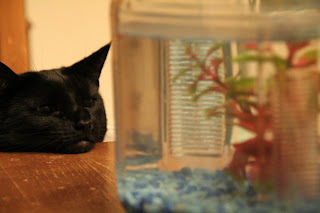 What concentration! Or is it constraint? Or both?
The cat in these pictures is Mona. Every evening after we finish dinner, Mona would jump onto one of the chairs, put her paws on the back of the chair to gaze into the china cabinet where we kept Delilah and meow like crazy. It ended up being a consistent reminder to feed, Delilah. And every once in a while, we'd bring Delilah out on the dining room table for some supervised visits between the two. Very cute.
Posted by Christine at 2:05 PM