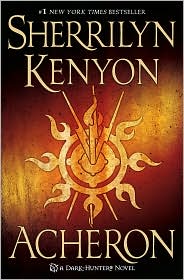 Fri. August 15th, 7:00 PM
Borders
10 Columbus Circle
New York, NY 10019
(212) 823-9775
Booksigning & Talk
I'm heading into New York on Friday night to see Sherrilyn Kenyon for her Acheron Book Tour. This will be my fourth time meeting Ms. Kenyon since August 2007. That's more often than I've met some of my blogging buddies. Seems almost unfair, don't you think?
The first time I met Sherrilyn Kenyon was in August 2007 when she came to a local New Jersey Barnes & Noble for the Devil May Cry book tour. I was immediately impressed by her warmth and humbleness towards her readers and fans.
Here's a picture of me with Sherrilyn the first time I met her. I am in my Dark Hunter zone--complete with a henna tattoo of the Artemis' Dark Hunter cross bow on my shoulder and Simi Demon horns [... little devil horns stolen from my daughters' dress up box. ;) ] 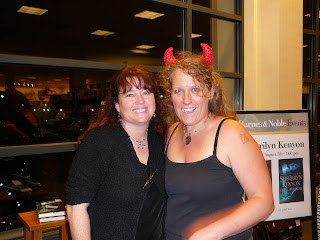 The second time I met Sherrilyn was several weeks later at the NJ RWA Literacy Signing in October 2007. She was again very kind and gracious and even said she remembered me. By now I had finished reading Devil May Cry and I got to chat a bit with her about the upcoming Year of Acheron. She said she really hoped people liked Ash's story and honestly sounded a bit nervous about it's reception by her readers. I admit, I was nervous, too. Was it possible to deliver a happily ever after worthy of a powerful and complex character like Ash? [...according to all the reviews I've been skimming this past week, I think the answer is Yes! Yay! :) ].
The last time I met Sherrilyn was in April 2008 at the NY Comic Con, which was a really different atmosphere to met her since this venue was so huge and she was clearly not the center of attention.
I'm imagining there will be A LOT of people at this Friday's Sherrilyn Kenyon event. It's New York City. It's Acheron. Can it get any bigger than that! Probably, but I like to pretend not. Embarrassingly, I'll be going to the book signing and talk without having read Acheron yet. How sad is that? I'll probably be the only one there who hasn't read it! Oh, wait! I'm making Kate go with me... she doesn't even read this series. Phew! She'll look sillier than me. :P
Anyone else going?
Posted by Christine at 9:39 AM