Banana bread is a family favorite in my house any time of the year. After years and years of trying different banana bread recipes, with a careful eye for lower fat versions, I found the perfect recipe for Classic Banana Bread in the September 2003 issue of Cooking Light magazine. It's my go-to recipe for banana bread for over six years now, feeding many happy tummies over the years. Every once in a while, though, I get in the mood for banana bread with a little extra something, and then I use this recipe for Coconut-Lime Banana Bread that I can't really call my own. It's nearly identical to the recipe in that same issue of Cooking Light for Coconut Banana Bread with Lime Glaze. I've merely altered the glaze so that it's less sweet, and I sprinkle a bit of coconut on the glaze at the end instead of right before baking.
This Coconut Lime Banana Bread is a delicious tropical twist to the classic banana bread that will deliver a little extra zing to your taste buds. 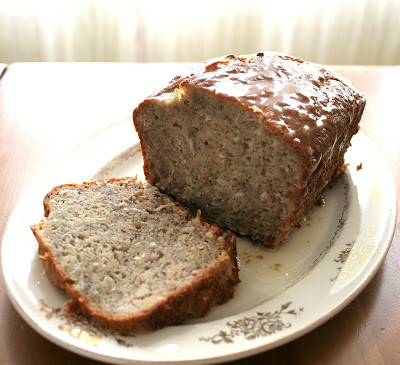 For the glaze:
1/4 cup powdered sugar
juice from 1/2 of a lime
1 tablespoon flaked, sweetened coconut

Lightly spoon flour into measuring cup and level with a knife. Combine flour, baking soda and salt in a small bowl and stir with a whisk.

Beat butter and granulated sugar on medium speed of a mixer until fluffy. Add eggs, one at a time and beat well with mixer. Add banana, yogurt, rum and vanilla and beat until combined. Add flour mixture and beat on low speed until just combined. Stir in the coconut. Pour batter into a lightly greased 9x5 inch loaf pan.

Bake for 1 hour until a toothpick inserted in center of bread comes out clean.

Let cool slightly and then remove from pan. Combine powdered sugar and lime juice in a small bowl and stir until smooth. Pour over warm bread and sprinkle with remaining flaked coconut. Serve warm or at room temperature.
Enjoy! :)
Posted by Christine at 6:10 PM