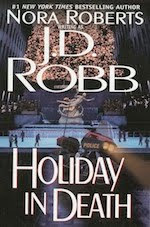 Holiday In Death takes place at Christmas time in the year 2058. It is the first Christmas that Eve and Roarke will have spent together and Roarke pulls out all the stops to make it a festive and memorable one for both of them. There are decorations, a party and for the first time in her life, Eve has to go Christmas shopping. Not just her new husband, but also for several friends.

Unfortunately, crime doesn't stop for the holidays, and Eve is on a case to catch a serial killer who is posing as Santa Claus, leaving tokens of the "The Twelve Days of Christmas" with each victim. Knowing the killer intends on twelve murders, Eve and her team race to catch the murderer before he claims more victims.

Holiday In Death is another great installment in the series. I have a feeling I'm going to be sounding like a broken record saying that, but clearly the author has come up with a no fail formula for writing these futuristic murder mystery stories with romantic elements. I thought the murders in Holiday In Death were particularly gruesome or maybe it was more the perverse calculation and execution of the crimes that had me feeling kind of sick. To make matters worse, the race to catch this killer became even more intense when two members Eve's team went undercover to try to set up the killer and there were a couple of incidents that had the potential to be even more disturbing than they already were.

As for the personal aspects of this story, Eve was definitely affected by the emotional impact of celebrating Christmas for the first time in her life. Of course it is always great to see a deeper love and familial attachment grow between Eve and Roarke, but it's also really rewarding to see Eve getting closer to her friends and colleagues, particularly with Dr. Mira and Peabody. Watching her struggle to shop for Christmas gifts for Roarke and her new found circle of friends was amusing to say the least. My one complaint with this novel, however, is that the gift exchanges weren't a bigger part of the ending after all that agonizing Eve did over the shopping and holiday hoopla. 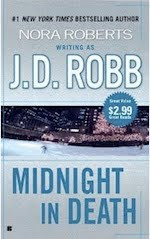 Immediately after I finished Holiday In Death, I decided to pull out the next story and promptly started reading it once I realized it was a novella. I'm so glad I did, too, because "Midnight In Death" takes place immediately after the closure of the Holiday In Death murder case, in the few days between Christmas and New Year's.

Eve is called to investigate the discovery of a body found splayed in the ice rink at Rockefeller Center, only to learn the dead man is a judge whom Eve knew. Attached to the body is a note, or rather a list, of people who are the intended victims of the murderer starting with the judge and ending with Eve. Immediately Eve identifies the killer as David Palmer whom she caught and helped put away in prison only three years ago. Apparently David Palmer was cunning enough to escape prison, but is he cunning enough to escape being caught by Eve once again? I don't think so. Eve does struggle with this one and someone close to her comes very close to being Palmer's next victim, but thankfully she triumphs. Like you thought she wouldn't?

Enter the url to your blog post that contains the list of In Death Challenge books you have read so far with Mr. Linky below.
Posted by Christine at 11:53 PM