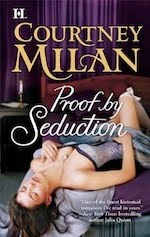 Proof by Seduction is the debut historical romance novel by author Courtney Milan. Back in December, I read Courtney Milan's novella, "This Wicked Gift" in The Heart of Christmas anthology with authors Mary Balogh and Nicola Cornick, which I found to be a smartly written little romantic tale about characters who learn some valuable life lessons within a small number pages. I had high hopes for Proof by Seduction, wondering what Ms. Milan could accomplish with a full length novel and I was not the least bit disappointed. Proof by Seduction was every bit as intelligent and romantic as "This Wicked Gift" with even more depth of plot, character developments, and valuable lessons in love between friends, family, and of the romantic kind. I simply adored Proof by Seduction and am anxiously anticipating Ms. Milan's next full length novel, Trial by Desire due out later this year.

One that I really appreciated about this novel from the start is that the author wasted no time getting right into the nitty-gritty of the plot and characterizations. Within the first several pages, the reader meets the three most prominent characters in the story and the premise and its driving force is exposed right away. From there, the story just takes off and doesn't lose momentum until the happily ever after is fulfilled.

For the last twelve years, Miss Jenny Keeble has been living under the guise of a fortune teller known as Madame Esmerelda. Ned Carthart is a young man who struggles with bouts of depression. Two years ago, Ned had just about given up on life and sought his fortune from Madame Esmerelda in order to determine whether or not he should follow through with taking his own life. Madame Esmerelda was clever and convincing with her lies and convinced Ned that a brighter future was indeed ahead of him and essentially saved his life. Since then, Ned has frequently visited Madame Esmerelda seeking guidance and two have become friends. When Ned's older cousin and charge, Gareth Carhart, the Marquess of Blakely finds out that Ned has squandered his money and his faith on the lies of a charlatan, he accompanies Ned on a visit to Madame Esmerelda in order to prove her a fraud. Instead, Madame Esmerelda challenges his scientific proof with a prediction of where and when Gareth will set eyes upon his future wife. All of this happens within the first chapter of Proof by Seduction and from there, the story simply takes off provides the reader with a constant stream of intelligent and witty dialogue, amusing conversations and predicaments, passionate romantic connections, and heart wrenching lessons between friends, family and lovers.

Proof by Seduction is an impressive debut novel. Not only is the novel a well written romance story, but I was also impressed with the depth of emotion that was spent on the relationships beyond that of the main couple. The friendship between Jenny and Ned was truly tested throughout the story and in the end, the resolution of their troubles was quite profound. This was such a pleasant touch to the story. Gareth's relationships with just about everyone are tested throughout the story--from his sister Laura to his cousin Ned to his employee Mr. White and of course, his blossoming love with Esmerelda. Gareth is repetitively pushed outside his comfort zone and forced to address his true feelings that he has mechanically shut down for so long.

Proof by Seduction is a heartwarming, romantic tale for all of the characters, but especially for Jenny and Gareth-- two intelligent, strong willed, yet lonely individuals who belong together living happily ever after.


Courtney Milan's second full length novel, Trial by Desire is Ned's story and is scheduled to be released on October 1, 2010. Happy Birthday to me! :)

While you're visiting Courtney Milan's site, be sure to read the blog entry wherein Mr. Milan reviews Proof by Seduction.

Mr. Milan reviews "This Wicked Gift", the novella from The Heart of Christmas anthology as well.