REVIEW: What A Scoundrel Wants by Carrie Lofty 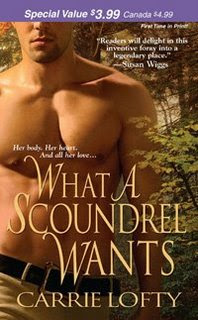 What A Scoundrel Wants is an historical romance set in medieval England at the turn of the 12th century. It is the tale of a rakish swordsman named Will Scarlet and a woman named Meg of Keyworth who is much sought after by the villains of Nottingham for her talents in alchemy. Will Scarlet is the nephew of the renowned Robin Hood and has abandoned his post as guardian of his uncle's estate in part because he feels he has performed an act of betrayal against his uncle, and in part because he is so desperate to stop living in his famous uncle's shadow once and for all. Will has since taken a position as a swordsman for the Sheriff of Nottingham.

Meg of Keyworth was blinded due to a childhood illness, yet is a strong and independent woman and completely capable when in her own element. Meg inherited her deceased father's passion for alchemy and has learned how to create fake jewels that she can sell in the marketplace to put food on the table for herself and her sister Ada. After having been deceived and humiliated by her lover Hugo and her sister Ada, she sends her sister to Nottingham to sell her jewels for profit, and Ada is arrested and imprisoned by none other than Will Scarlet. Upon learning of her sister's arrest, Meg solicits the aid of her late father's only friend of station, Lord Whitstowe to enter the castle of Nottingham to free her sister. On route to the castle, however, they cross paths with the sheriff's guards and a bloody battle quickly ensues. Will Scarlet witnesses traitorous behavior among the fighting parties, including the death of Lord Whitstowe by the hand of the Lord's own guards and is not sure who is on the side of the law and who has what intentions in this unexpected battle. While trying to figure out what is going on and what to do, he instinctually responds to a woman's screams and rescues Meg from being violated and taken prisoner by these men. Will and Meg escape into the forest and Will decides he needs her as witness to the truth of the betrayals that took place in the battle before he is framed for murder, only to find out his witness is a blind woman and the sister of the woman he arrested in Nottingham no less. Obviously, the relationship between Will and Meg is full of anger, frustration and even hatred, yet they form a sort of alliance because they each need the other for their own purposes. Despite their unlikely pairing, heat develops between the two throughout their treacherous escapades through Nottingham over the course of a few weeks and they fight each other every step of the way.

It has been awhile since I read a novel that took more than a few chapters to get interested or involved in a story and its characters, and I'm afraid What A Scoundrel Wants was the first to stump me in quite some time. For the first 200 pages or so, I felt no investment in the characters and I wasn't even intrigued by the outcome of their quests. I continued on, however, largely out of obligation because I had won this book in a contest and promised a review in return for the prize. I'm glad I did, however, because finally in the last 150 pages or so of the book, I was at the edge of my seat desperate to see Will and Meg through to their happily ever after. Still, it took reading 200 pages to get that point, which is rather disappointing.

For more than half the book, I honestly didn't think very highly of Meg at all. She is not a very nice person, and in fact is deceitful and selfish. She creates counterfeit jewels and sells them for profit. Out of anger and perhaps even revenge for Ada's betrayal, Meg has her sister be the one to risk selling the jewels in the marketplace where she is arrested and imprisoned for fraud. So Meg compromised her sister's safety out of vengeance and is angry and spiteful when she is caught? Those actions alone make for a long road to feeling compassion for this woman, let alone feeling she deserves the affection of Will Scarlet who responds to keeping her safe out of mere chivalry from the very first scene. Of course, Meg's blindness and the acts of injustice against her play a huge role in molding the person she has become, yet her bitterness and spite was rather overwhelming and it took a long time before I came to care for her.

Will Scarlet is not nearly the scoundrel he is claimed to be. He did perform a singular act of betrayal against Robin Hood, he was not the only one responsible party, so calling him a scoundrel for it is quite exaggerated. If his actions several years prior as an outlaw alongside Robin Hood deemed him a scoundrel, it is never revealed in the novel. Will is struggling to find his own way in the world, putting an end to living in the shadow of his uncle, which adds depth to his character, and his dedication to chivalry and carrying out justice is admirable.

Readers who love stories of Robin Hood and the like would find What A Scoundrel Wants to be an enjoyable and rewarding read. The story is loaded with adventure, danger, and intrigue right to the last pages of the book. Will Scarlet and Meg Keyworth both have complicated pasts and their present situations are even more complicated, each contributing to interesting character developments for both, and their union a curious, yet satisfying part of the tale. Unfortunately for me, the incessant fighting, anger and spite from Meg, in addition to her inconsistent intentions with Will detracted from my enjoyment of a large part of the novel.

My grade for this novel is based on giving the first 200 pages a C and the last 154 pages a B.

Don't just take my word for it, though. The following reviewers really loved What A Scoundrel Wants: