REVIEW: The Tales of Beedle the Bard by J.K. Rowling 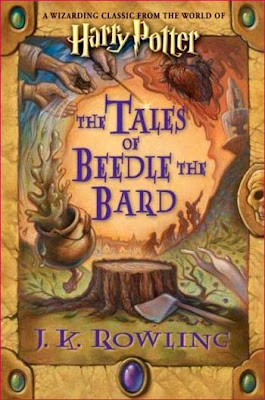 The Tales of Beedle the Bard is a small collection of fables for wizards and witches that have been recorded by the beloved headmaster of Hogwarts, Albus Dumbledore and translated by Hermoine Granger. Much like Aesop's fables, which are often grim stories leading to thoughtful moral lessons that have been written for muggles, The Tales of Beedle the Bard have been written with the similar intention of providing lessons on values such honesty and charity for wizards and witches. The tales also attempt to encourage the peaceful coexistence of wizards and witches with muggles.

There are five tales in the book and each tale is followed by comprehensive commentary and footnotes by Albus Dumbledore. The tales themselves are short, yet interesting, especially if you are a fan of the Harry Potter world. The commentary helped tie the stories into the wizarding world created by J.K. Rowling, offering small insights into the history of wizards and witches, spells, wands, and so on. The book makes a nice addition to our set of all seven Harry Potter novels in hardcover, along with Quidditch Through The Ages and Fantastic Beasts and Where to Find Them, but I don't necessarily consider it a "must read" for Harry Potter fans.

My least favorite tale is "The Warlock's Hairy Heart." I just didn't get the ending. The first time I read through it, I thought, 'Huh?' I read the last two pages again, and also Dumbledore's commentary and I think I get it, but it is a bit odd. I suppose the moral lesson makes more sense in the wizarding world, and just isn't applicable to a muggle like me. Oh well.

My favorite tale is "The Fountain of Fair Fortune," as its lesson included lessons on friendship, teamwork, and sacrifice. Its message was the most positive and uplifting, not to mention there was a little romantic happily ever after.

The best part of The Tales of Beedle the Bard is the fact that net proceeds from the sales of this book go toward the Children's High Level Group (CHLG), a non profit charity founded by J.K. Rowling and Baroness Nicholson of Winterbourne, MEP whose aim is to provide assistance to and improve the lives of marginalized and institutionalized children throughout Europe. You can read more about the Children's High Level Group at www.chlg.org.
GRADE: B-
Posted by Christine at 11:20 PM