We bought Guitar Hero III: Legends of Rock and a PS 3 console for Christmas in 2007, but after failing miserably when convinced to play by my family who are all of above average musical talent whereas my musical ability lies in the realm of negative, and getting booed off the stage in a mere few seconds, I quit the band. Getting booed off the stage is awful, you know?

Fast forward to Christmas break 2008. So we've been living in this one bedroom apartment (condo, whatever...) about a mile and a half from our house since Thanksgiving weekend (long story... ) with NO TELEVISION and a slower wireless network (that we're basically hijacking from some unassuming dude in the apartment complex who has an unprotected wireless router... SCORE!), so we brought along a projector and the PS 3 so we can at least play DVDs and video games. And since we're living in such close quarters (two adults, a senior citizen, a teen, a tween and four cats.... in a one bedroom apartment, condo, whatever... ), it was only a matter of time (minutes) before I got convinced to give Guitar Hero another go one year later. I figured I might as well since I'm going to have to listen to it up close and personal anyway since I have no place else in the place to sit really. So I fail miserably on my first attempt and get booed off the stage in a matter of ... oh ... less than 20 notes, I imagine. No surprises there. But my teen steps in and shows me how to place my fingers on the 'keys' and how to angle my wrist just right, and how to relax my fingers and wrist (I should follow her advice. There's a good reason she's first chair violin in the school orchestra, you know?). I give it another whirl, and guess what? I actually freakin' finished a song! There was singing, dancing, records playing, dancing in the streets! Okay, well not really. But I did get lots of praise and pats on the back and hugs and kisses from my fans. I liked that. So I went back for more. And more. And more. And that, my friends, is how a Guitar Hero Mom is born. 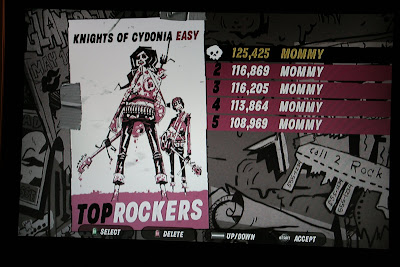 Actually, I'm practically sweeping the charts on ALL the songs.

Because no one else plays on Easy but me.

But that's beside the point! The point is I'm a STAR!

In my house, in the eyes of my husband and daughters.

And I apparently, I can go to parties now, too! Sweet.

My favorite songs to play:
Knights of Cydonia, Muse
My Name Is Jonas, Weezer
Hit Me With Your Best Shot, Pat Benatar
Black Magic Woman, Santana
When You Were Young, The Killers
Ruby, Kaiser Chiefs
Don't Hold Back, The Sleeping
Admit to me that you play video games, too! I'd love to hear what you play!
Posted by Christine at 12:55 AM