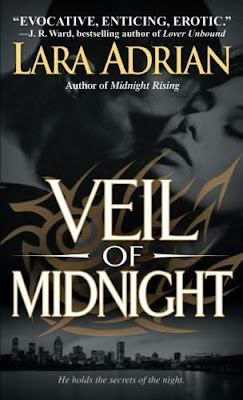 In the world of the Midnight Breeds, vampires are the descendants of an alien species that crashed on Earth thousands of years ago. These other worldly beings survived on human blood and were able to successfully mate with the select few human women of compatible DNA capable of bearing their young. These women, known as Breedmates, are rare, yet still exist today and all bear a distinguishable birthmark in the shape of a teardrop sitting above a crescent moon somewhere on their body. The first generation of young vampires fathered by the alien species born to human Breedmates are called Gen Ones and are the oldest and strongest of all vampires and highly respected and feared by all Breeds. A finite number of Gen One Breeds are still alive today, but their numbers are dwindling.
The Midnight Breed Series follows the lives of the Midnight Breed Warriors of the Order--an organization established by a Gen One who, with a select few brethren, eliminated the violent fore fathers of their species in order to protect the secrecy of their existence to protect humans who are in essence the vampires' only sustainable food source and method of breeding. The Order has also taken on the task of stopping the threat of the growing number of vampires who are going Rogue--feeding and killing humans and Breeds alike and jeopardizing the safety and security of their species. Each book in the series tells the ongoing story of the Order's fight in this Blood War and also the love story of a single Breed Warrior as he and his Breedmate find their happily ever after.

Veil of Midnight is the story of Breed Warrior Nikolai who is the weapons specialist of the Order and an unbeatable fighter. He has been dispatched by the Order to Montreal to find the reclusive Gen One named Sergie Yakut in order to warn him of a new threat against Gen One Breeds all over the world. It appears that Gen Ones are being sought out and assassinated one by one by some organized faction. A faction that the Order believes is being lead by a second generation Breed, the son of First Gen named Dragos who had hidden the sole surviving alien fore father of the Breeds for hundreds of years in a cave. To make matters worse, Dragos has released this alien forefather and has been using him to breed powerful First Gens, not unlike breeding his own unstoppable army.

For the first time ever, Nikolai is duped and captured by a fighter of comparable fighting skill who just so happens to be a human female. A human female who also bears the mark of a Breedmate. Her name is Renata and it turns out she's lives in Sergei Yakut's compound and is one of his body guards. This would seem like good news for Nikolai, but things are not exactly what one would expect. It turns out that not all First Gens agree with the Breeds' peaceful coexistence with humans, and, as evident in previous Midnight Breed novels, not all Breeds support the Order or their mission. Sergei Yakut is old school First Gen, if you will, and wants nothing to do with the Order and could care less about the assassination attempts on other First Gens around the world.

Things turn topsy-turvy rather quickly for Nikolai and although he manages to leave Yakut's compound after making some new enemies, he lands in the not so kind hands of the Montreal Enforcement Agency, an organization headed by the Montreal Darkhaven's leader who is also up to no good. The plot gets thick when Renata turns to Nikolai for help in rescuing a loved one, a child with an alarming psychic ability that she has vowed to protect. Nikolai and Renata come together to help each other reach the other's goals--rescue the child and uncover the violent truths about the Gen One assassination attempts. Of course, they fall in love along the way, although that doesn't come easy for these two warriors who fight their emotions every step of the way.

Veil of Midnight is yet another great installment in this consistently written paranormal action romance series by author Lara Adrian. The complexity of the Midnight Breed world continues to expand, yet always adheres to world rules established in preceding stories. Veil of Midnight is full of surprising plot twists and unexpected deaths that keep the story moving at an entertaining pace and with the kind of tension and exciting action sequences that readers of this series have come to love.

Lara Adrian's Midnight Breed heroes have all been strong, determined and honorable heroes who appear capable of anything except perhaps, resisting love when it finally finds them, and Nikolai is no exception. The heroines in this series are equally strong and honorable, who are very brave when it comes to working with the Order for the greater good of the Breed, and of course, falling in love with a vampire. Renata has had a difficult life and has become the strong warrior she is in Veil of Midnight in order to survive the world she was forced into at a young age. She works hard at maintaining her edge as an unbeatable fighter not because she's simply angry, out for revenge or on some mission to save the world, but because she has to if she wants to stay alive. I think the fact that she knows how dangerously powerful vampires truly are and how dangerously easy it could be for her to mess up and lose her edge, makes her a bit vulnerable which in turn makes her character that much more realistic and smart. Also, the fact that she has promised to protect an innocent child reveals a compassionate side of Renata that makes her character even more appealing. Of course, she's never too compassionate that it stops her from showing Nikolai just how dangerous she really is.

Consistent world building, great characters, a suspenseful plot and a sweet romance make Veil of Midnight one of my favorites in this series. The pacing of the story, the increasing complexity of the series arc and the developing romance between Nikolai and Renata definitely makes this novel shine.

There is a minor thread of a subplot that takes place throughout Veil of Midnight that takes place with Andreas Reichen, the Berlin DarkHaven leader who was a leading secondary character Midnight Awakening, that ended on an utterly spine chilling note. I am undoubtedly now waiting on pins and needles for the release of the next book in the Midnight Breed Series, Ashes of Midnight, scheduled for release on May 26, 2009.

Although I did not formally review preceding novels in this series, I'm including the following for comparison. Please also refer to my grading system for more explanation on my letter grading.