I love Halloween. The costumes, the pumpkins, the decorations, the delicious seasonal foods, the fun tricks and treats, and the candy! This Halloween, however, pretty much snuck up on me without warning since I've been so preoccupied with the house, so I feel lacked its usual fanfare that I love, but it was a fun one in the end. I managed to at least decorate the front porch a bit last weekend, and get costumes together for my girls. My 9 year old was asked to be one of the Seven Dwarfs with a bunch of her friends. [She was Bashful, of course. Didn't even have to pose shyly for costume judging or photos--she fits the mold perfectly as is. ;) ] One of the moms did a lot of legwork to get matching details for each girl, so I just had to get the pants and shirt together. Kinda lame on my part, but the efforts of the organizing mom were well rewarded when the eight girls dressed as Snow White and the Seven Dwarfs won first place last Sunday in our town's Halloween Costume Contest and Parade in the group category. Yay! Little effort on my part and a first place trophy? Win win, if you ask me!

At the town Halloween Costume Contest and Parade. Happy is at a soccer game. 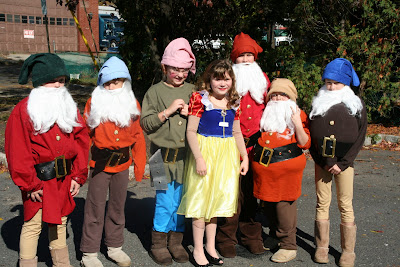 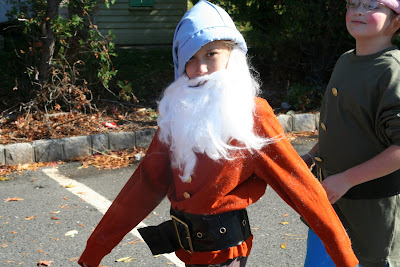 Snow White and the Seven Dwarfs at the school parade today. 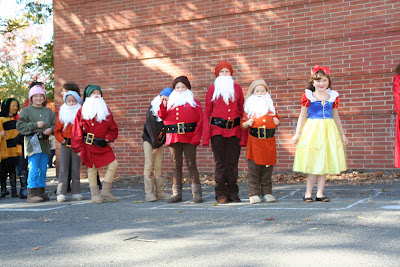 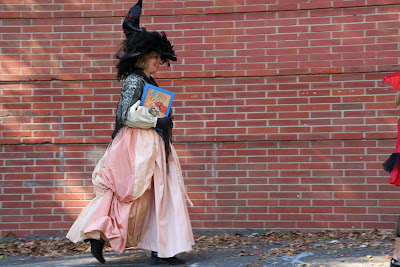 So after school today, Snow White and the Seven Dwarfs, along with one mom dressed as Queen Maleficent, had plans to trick or treat together for an hour or so at the shops downtown before going their separate ways to be with other friends or families in their own neighborhoods. Well, my little Dwarf came home from school with tears in her eyes over who knows what, proclaiming that she didn't want to trick or treat downtown or anywhere else with the other dwarfs or Snow White. She doesn't even want to be a dwarf. What's a mom to do? Part of me wanted to pressure her to join her group for even just half an hour because they were counting on her to complete the ensemble. But the other part of me just wanted to say forget it. She did the town Costume Contest and Parade and she played the part all day at school. Halloween is supposed to be fun and happy, not stressful or tearful. If she really doesn't want to go, I won't make her. Needless to say, the second voice was the one I listened to and agreed that she didn't have to go with the group. I took it one step further and suggested she trick or treat on her own as something different. Of course, her first reaction was, "But I don't have another costume." Hellllooooo??!!?! Years of dance costumes and a basket of assorted dress up accessories on the shelf of her closet and she doesn't have another costume? I could have pulled together maybe a dozen or more last minute costumes. We found bunny ears, she wore a white t-shirt, white tights and a white corduroy skirt and voila! An Easter Bunny. Only she used a pumpkin head instead of an Easter basket for her candy bucket.
My little bunny. The ex Dwarf.
Looking much happier. 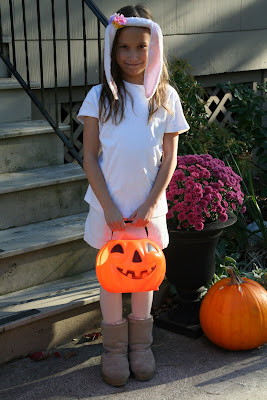 This year my 13 year old finally used one of her past year's dance recital costumes for a Halloween costume. Finally! It's frightening to say, but we probably have a few thousands of dollars worth of dance costumes after the 14 cumulative years of dancing between both of my girls. And finally my oldest decides to use one. She basically took a gorgeous ballet costume and cut the lace off the tutu, shortened it a bit, wore fishnet stockings, Converse sneakers, and lots of blue and black makeup to be a goth ballerina. Okaaaay. Welcome to the teens.
My goth ballerina.
In the 'pair of scissors $72 vintage 2007 ballet recital costume.' 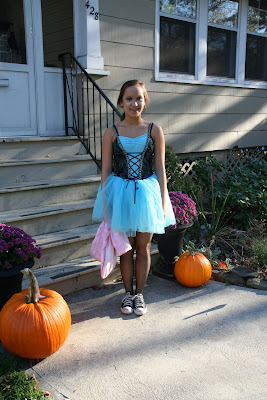 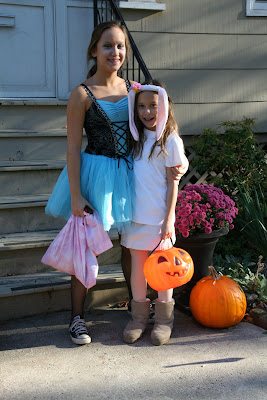 I dropped my teen off at a friends house to go trick or treating with a group. Thank goodness for cell phones, I can keep easy tabs on her throughout the afternoon and evening.
My bunny and I called on a friend of hers who was thankfully free to trick or treat with us for a while. The girls had a really great time together and I could tell by my bunny's relaxed and carefree demeanor that I made the right call in allowing her to change her costume and her plans at the last minute. 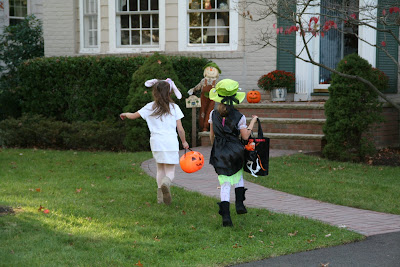 Look at that happy face. :) 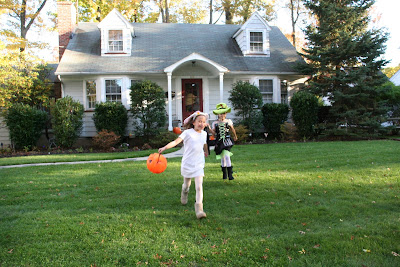 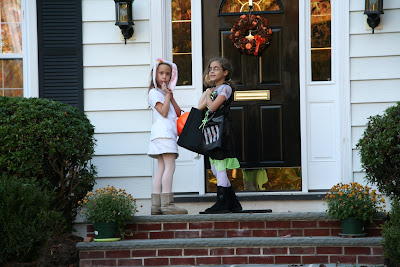 This house had the best treats ever: coffee for weary parents!
What a wonderful idea, don't you think? 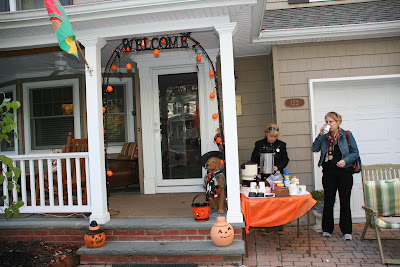 I just couldn't resist posting a few honorable mentions, i.e., other people's kids.
This is a little friend of mine (I met his mom just before she got pregnant with him). He's dressed up as Michael Phelps, of course. So incredibly cute! 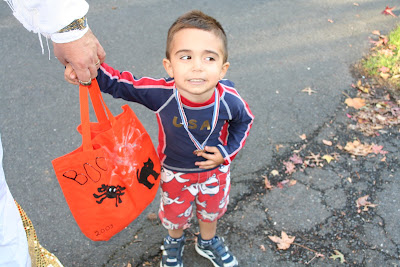 Another young man whose mother I've known since before he was in her womb. He gave his very artistic and talented mother very detailed specifications on how to make his 'Candy Robot' costume. So cute. So creative. So smart! My bunny and her friend had a great time trick or treating together, but after two and a half hours, we started to get cold and hungry and called it a night around 6 pm. Fine by me! :)
My teen, however, has been out since 3:30 pm this afternoon. Trick or treating with this group, pizza at this one's house, then more trick or treating before I picked four of them up only to deliver them to a party at a boys house! Eeep! I'm showing up a few minutes early to pick her up because the mom promised to give me the inside scoop on some of the boys I'm not so familiar with. In fact . . . it's time to go!