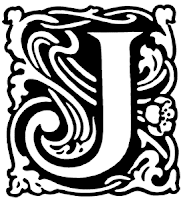 I saw this meme at Stacy's Place on Earth, and decided to play along. Before I play my version of the meme, here are the rules:

1. Comment on this blog and ask for a letter.
2. I will give you one.
3. Think of 5 fictional characters whose name begins with that letter, and post their names and your comments on that character on your blog.

Stacy assigned me the letter 'J.'  I chose all romance heroes whose first name starts with the lettter 'J.'

1. Jack Travis, hero of the upcoming Lisa Kleypas contemporary romance, Smooth Talking Stranger. So far, readers had a brief glimpse of Jack Travis in Sugar Daddy, and then a more prominent one as the brother of the heroine Haven Travis in Blue Eyed Devil. Jack Travis and Gage Travis were both protective of their sister Haven, and I admired the way Jack still gave Haven the space she needed to figure out her own way. He's obviously a ladies man, i.e., he has many, frequent lovers, but I get the impression that he's always a gentleman. Well, at least I think he is. LOL Even though he hasn't yet had is own story, with Lisa Kleypas writing his story, I'm confident he'll be a hero I'll love. Smooth Talking Stranger is scheduled for release in March 2009 and you can read my post about it HERE.

2. Judd Lauren, hero of Caressed by Ice, Book 3 in the Psy-Changeling series by Nalini Singh. Judd is a defected Arrow or soldier of the Psy Council who is renowned for his cold silence and control. He falls in love with Brenna Kincaid, the sensual Snow Dancer wolf who has just been rescued from having had been abducted, abused and experimented on by a sociopathic killer. Judd's struggle with finding a balance between the cold, unfeeling nature of his psy being and the desire to be emotionally and physically intimate with Brenna just melted my heart.

3. Jacob Black from the Twilight Series by Stephenie Meyer. Jacob Black is best friends with the heroine Bella Swan, their love often teetering on the edge of friendship and lovers throughout much of the series. While it is undeniable that Bella Swan and Edward Cullen are soulmates, the intensity and wholesomeness of the love shared between Bella and Jacob cannot be denied. On more than one occasion, Jacob demonstrates what it means to be a hero and by the end of the series, he is my favorite Twilight character. For even more explanation of why I love Jacob, read this awesome post HERE by Ciara on her blog.

4. Julian Sinclair, the hero from The Duke of Shadows by Meredith Duran. I don't normally gravitate to historical romance, but do pick up one up now and then if highly recommended by readers, this being one of them and I loved it! The story was poignant and romantic, the hero and heroine flawed and misunderstood, but oh so right for each other. The author's story telling voice was beautiful and poetic and I'm truly looking forward to her upcoming novels.

5. John Matthew, a.k.a. JM, a.k.a. Terrhor from J.R. Ward's Black Dagger Brotherhood series. JM's story has been sloooowly developing over this series, ever since the very first book when the Scribe Virgin gave the deceased vampire, Darius, who was Beth's father and Tohr's best friend, the gift of returning to Earth as the young pretrans John Matthew. It's been a fun, albeit a rather drawn out, journey as readers have watched JM transition from a scared, abused young orphan to the lethal vampire he was in the more recent novels. His role was especially interesting in Lover Enshrined, and I'm looking forward to his own story. And please, J.R., make someone figure out that he is Darius soon. His apparent mysterious identity is getting old.
Anyone want to play?
Posted by Christine at 3:34 PM