IZOD Center, Rutherford, NJ
October 27, 2008
I didn't really plan on writing a review for last night's concert, but when I started to type a response to the comments in the post I made yesterday, I realized I had a lot to say! So here's my first concert review. Okay, it's more of a recap than a review. Ha! Enjoy. ;) 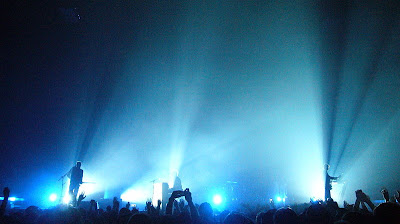 I've only been a fan of Coldplay for about two years now and until I recently purchased their latest album Viva La Vida (EMI Records Ltd., 2008), I've only had about a dozen or so of their biggest hits on my iPod. After seeing Coldplay's outstanding performance last night, I'm an even bigger fan now. They were amazing. 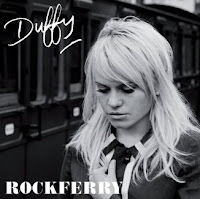 The opening act was Duffy, the 24 year old Welsh singer-songwriter who debuted at number one on the UK Album charts with her recent album Rockferry. Her musical style is a neo-soulful blend of pop, soul and rock'n'roll along the lines of artists Kylie Minogue and Amy Winehouse, and while I think she and her band are very talented--based on what I've sampled at her website, anyway-- I didn't think her performance last night was that impressive. Duffy looked amazing in her tiny black lace dress, but she failed to capture the audience's attention as she barely moved across the stage and her voice and lyrics seemed lost to the sound of the band. Only two songs stood out to me, "Serious" and the popular hit "Mercy." Still, Duffy is clearly a talented young artist with a lot of potential and I think the pop charts will be seeing a lot of her in the future.

The concert. First, I'd like to make a disclaimer about my concert reviewing skills. I haven't been to a rock concert in ages, and even then I haven't been to many. I saw U2 in 1987 for their Joshua Tree Tour and then a year or so later I saw Sting. I think that was in 1988, maybe. I know I also went to an INXS Kick concert and saw The Psychedelic Furs around that time, too, but I barely remember that. Basically, my point is that maybe I'm a little out of touch about what makes an amazing concert, but regardless of my concert going experiences or lack thereof, I have to say that last night's performance by Coldplay was fantastic. The song list was a perfect blend of past hits and new tracks from their current album Viva La Vida and lead singer Chris Martin made the concert feel intimate with his natural ability to connect with his audience. Really a fantastic show.
I'm totally kicking myself in the behind today. I didn't bring a camera to the concert. I know! I know! Idiot. And I got this great little purse sized digital camera for my birthday, too. 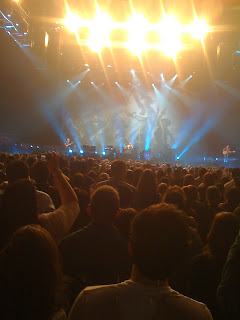 Having floor seats, I could have had some really great shots. Ah, live and learn. So I made due with my iPhone camera, which actually takes decent photos for a camera phone, but alas, no zoom capabilities, so the photos aren't that great. I swear we had better views of the band in person than these pictures suggest. Honest. Anyway, here they are:

Coldplay opened with the instrumental track, "Life in Technicolor" playing behind a sheer curtain, then the curtain lifted as they played their first vocal track, "Violet Hill."

I thought the lighting and technical effects during the concert were great. Granted it's been a while since I've been to a rock concert, but I really enjoyed the artistry in this performance. The effects weren't anything cutting edge, per se, but they complimented the music and the artists perfectly. There were these orbs suspended above the stage, and one much larger orb above the audience, and they either had varying colors and patterns swirling within them, or they were used to project live images of the band throughout the performance. Again, the orbs brought a perfect compliment to the tone of the show. 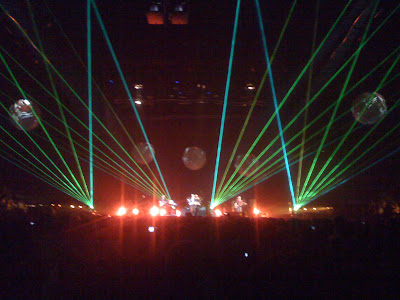 At one point, Chris Martin, while playing solo on the piano, sang "The Hardest Part" (X&Y, EMI Records Ltd., 2005) dedicated to singer, model, actress Jennifer Hudson as she grieves for the death of three family members. In case you haven't heard about the tragedy that has struck Jennifer Hudson and her family, last weekend her mother and brother were shot dead in their home and her 7 year old nephew had gone missing, only to be found dead in an abandoned car yesterday, October 27, 2008. The suspect is a family member, the estranged husband of Jennifer's sister, the father of the deceased young boy (Source: Chicago Tribune, chicagotribune.com). My heart goes out to Jennifer Hudson and her loved ones. Very sad.
Later in the concert, band members jogged off the stage and headed into the midlevel seating where they stood among the audience and played a few songs so that other fans could feel what it's like to have front row seats. One of the songs they played here is one of my favorites, "The Scientist." When he announced the song, Chris Martin playfully poked fun of the Jonas Brothers, saying it was their hit. Even my 13 year old, who saw the Jonas Brothers in concert over the summer, laughed at the humor. Chris Martin has a wonderful way about him that he can poke fun playfully without coming across insulting. That's a wonderful skill, I think. 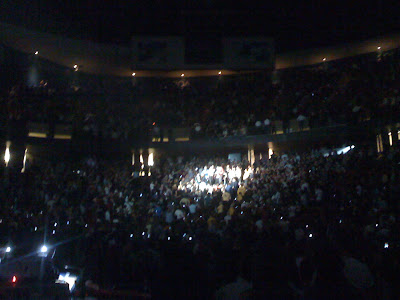 Images of Japanese history and culture were displayed on the large screen behind the band while they performed the song "Lovers in Japan / Reign on Love" and millions of tissue paper butterflies were dropped over the floor area. I have to admit I was so happy to have had floor seats for this part. It was so beautiful. 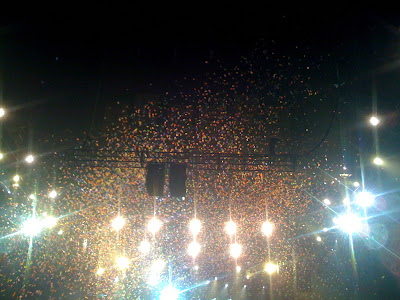 This photo was taken during their last song and would have made a great shot if only I had a real camera. ::sigh:: I forgot what song they were playing in this photo. Maybe it was Lost. 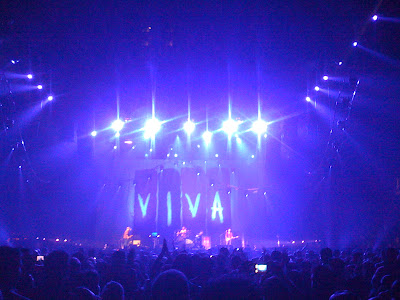 The crowd gets Coldplay to come back out for an encore. 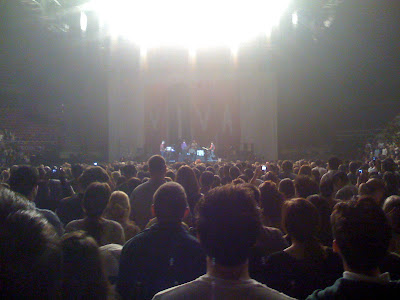 Which, I think, is standard and expected. I was certainly pleased, because there was one more favorite song that the band hadn't yet played . . . "Yellow." 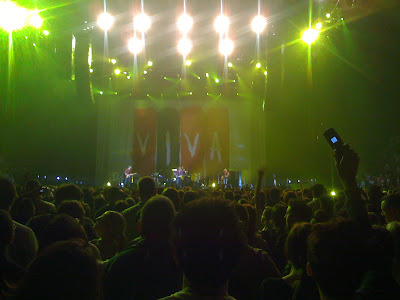 All in all, Coldplay delivered an amazing performance last night. I'm so thrilled I was able to go, it was a wonderful, memorable night with my daughter that I'll never forget. I can't wait to see them again on their next tour.
Posted by Christine at 11:19 AM