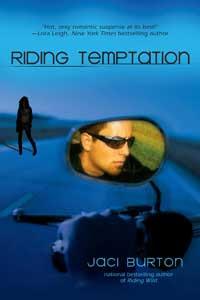 Riding Temptation is the second book in the Wild Riders series by Jaci Burton. The Wild Riders is a secret government agency whose agents are ex-theives, hard core bikers and now work undercover to solve federal crimes. In Riding Temptation, agents Spencer King, Diaz Delgado, and newcomer Jessie Matthews set out on a mission to uncover an alleged arms deal between a biker gang and a band of survivalists deep in the Ozarks of Arkansas.

At age fifteen, Jess ran away from home when her crack addict mother tried to sell Jess' virginity for a fix. Jess was living in the streets until the day Mac Canfield, the hero of Riding Wild, caught her stealing a car. Mac brought her to General Grange Lee, the founder and leader of the Wild Riders where she was given a new chance at life. She lived in the safety of the Wild Rider compound where finished school and trained with all the guys who are like brothers to her. Well, all the guys except Diaz Delgado, that is. Diaz has always been different than the others and Jess has always had feelings for Diaz that were very different from brotherly. Now at twenty three years old, Jess is on her very first Wild Rider mission hoping to prove she's got the right stuff to be an agent, but also hoping Diaz will notice her as a woman and not as a sister.

Growing up, Diaz's father was violently abusive to his mother and because Diaz is so hot tempered, he's always been afraid of becoming just like his father. Consequently, Diaz has never allowed himself to enter into a real relationship with a woman out of fear of hurting someone he loved. He's always distanced himself from Jessie and never really gotten close to her like a sister as the other guys have. Now she's a beautiful woman and he can't help but be attracted to her. For the success of this mission and so the guys don't kill him for laying a hand on Jess, however, he intends to bury those feelings for good. Or so he thinks.

Riding Temptation lives up to its series name as it takes the reader on a wild ride filled with danger, intrigue and a very sexy love story. The plot revolves around the Wild Rider agents attending a bike rally, infiltrating a bike gang by going through the gang's initiation all with the dangerous mission of busting an illegal arms deal. This part of the story was interesting and unpredictable as I was never quite sure who to trust or who was on the right side of the law. The bike rally and gang initiation were fascinating. Jaci writes about the biker culture in such a way that the reader can feel the vibe that belonging to biker community provides for those who are passionate about biking.

The love story between Diaz and Jess was wonderfully written. I thought the relationship between them was realistic, as were the obstacles and personal barriers that complicated their relationship. Diaz didn't think it was a good idea to get sexually or romantically involved with Jess partly because he's known her since was a young teen and she's like a little sister to the other Wild Riders, and also because he was afraid of becoming violent to the woman he loved like his father was. These are understandable concerns, and the author explored these issues in a realisitc way such that the reader was empathetic with Diaz but also wanted and believed it when he and Jess worked it out in the end.

Jess. I started reading Riding Temptation knowing it was going to be a fun and sexy read--which it was-- but I didn't expect to be so impressed by this seemingly simple character of Jess Matthews. It's difficult to explain exactly what it is about Jess that makes me adore her character so much, but simply put, she is my favorite virgin heroine ever. Having lived in the Wild Rider compound under the watchful and protective eye of Grange Lee and his Wild Riders, it's easy to believe that at twenty three she hasn't had much opportunity to meet or have relationships with a lot of guys. She's not naive, however, and knows a lot about sex. She's sneaked the guys' porn videos into her room, she has a few sexy piercings, and she enjoys pleasuring herself. She's fully aware of her sexuality and carries it with confidence, but also has this subtle air of innocence that compliments her character so well. She's competent when it comes to being an agent, but again, her inexperience reveals itself a bit during the mission. Where others would get defensive and have trouble answering to her mission leader, Jess is smart, honest, and dedicated enough to admit her mistakes, stand corrected, and figure out how to fix them. Above and beyond all that, Jess is the one who finally shows Diaz that he's not his father and he can love someone and be loved.

Jaci Burton has a fantastic story telling voice and a talent for moving a story at a fast pace with a suspenseful plot and plenty of steam sex. Jaci has an amazing talent for writing the most incredible love scenes. She can write a love scene that spans pages and pages, yet it's always perfectly paced. And hot. Very hot.

Jaci's characters are always easy to relate to and very believable, and the dialogue between her characters is so natural and realistic. The characters' emotions are seamlessly revealed through both the vivid dialogue, body language, and exciting story line, which I love.

Riding Temptation is a highly charged story of suspense and a sensual romance that gets your blood pumping and your heart melting. I love the life of the Wild Riders and can't wait for Spence's story, Riding on Instinct coming out in April 2009.

Riding Temptation hits bookstores on October 7, 2008.
GRADE: A-
Want to win a copy of Jaci Burton's first Wild Rider novel, Riding Wild? Comment on my birthday post above this to enter your name in a drawing!
Posted by Christine at 5:25 PM