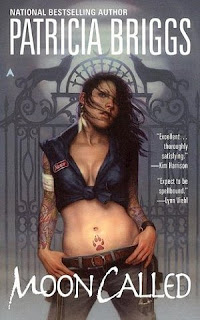 Moon Called is Ms. Briggs' first novel in her urban fantasy Mercedes Thompson series. Mercedes Thompson, or Mercy, is a young, independent woman who makes ends meet through the garage she owns where she specializes in repairing German cars. And she's a rare coyote shapechanger.
Mercy was raised by foster parents who were werewolves under the dominion of the nation's number one alpha, Bran Cornick. At the age of sixteen, Bran asked Mercy to leave the community when Bran's son Samuel--and the object of Mercy's teenage love-- wanted to claim Mercy as his mate. Bran sent Mercy away not because he felt she was unworthy, but because he felt she was too young to understand Samuel's motives for mating with her. Although Samuel did care for her, he wanted Mercy as his mate because she would be able to successfully bear his children, not because he loved her like a man loves a woman.
Mercy eventually settled in Twin-Cities Washington where she took over ownership of Zee's garage. Zee is Mercy's friend and mentor who also happens to be fae or a gremlin as his kind is sometimes referred to as. One of Mercy's faithful customers is a vampire named Stefan and she also happens to live next door to the area's alpha werewolf, Adam Hauptman. She's also friends with a human cop. Seemingly a plain jane kind of girl, Mercy's relationships with this eclectic mix of beings makes for quite an interesting life.
Moon Called begins with Mercy befriending a young, newly turned werewolf named Mac. When Mercy stumbles upon Mac in an antagonistic confrontation with strangers, she defends Mac and accidentally kills a werewolf which sets a series of deadly events into motion and establishes the conflict of this story. No sooner is the death of this werewolf cleaned up so to speak, that the Alpha's home is attacked, leaving Adam with life threatening injuries and his human daughter Jesse kidnapped by the perpetrators. Suspecting betrayal within Adam's pack, Mercy brings the severely injured Adam to Bran's pack for help before embarking on a rescue mission to save Jesse. Of course lots of complications arise, including having her old love Samuel back in her life again.
I've noticed my gravitation to female-centered urban fantasy lately, and I'm totally loving it. Ms. Briggs' Mercedes Thompson series is based on an interesting and well thought out mythology that includes were-creatures, fae, vampires and the rare walkers and humans. Information on the mythology and the world is not dumped on the reader all at once in this first novel, but carefully embedded throughout the story as warranted.  I do admit, however, that at times I did want to rush through the informative parts to get to the impending action scenes.  In the end, I'm glad I didn't rush through it, because the world building is quite good.
The premise of Moon Called is based on well developed conflict that had me guessing culprit and motive until the very end. My only complaint, however, is that when the culprit of the conflict was finally revealed, I couldn't help but wonder if his motivations were truly strong enough to justify the lengths that had to be met to make his plan come to fruition. Perhaps if I reread the last few chapters it will make more sense.
Mercy Thompson is a very likeable and realistic heroine. She's smart and confident, yet unpretentious. She's sometimes gutsy and impulsive, but always looking to do right by others. She's somewhat of a loner, yet has the attention and loyalty of very interesting 'people' in rather prominent places who would do anything to protect her. And while she is tough and fairly assertive, Mercy knows her limitations and isn't afraid to ask for help when she needs it. Her motivations and actions are with purpose. She just makes sense. I love that.
Mercy has two potentially romantic interests in her life at this point. Her former teenage love, Dr. Samuel Cornick, who still manages to stir feelings in her, and her Alpha neighbor Adam Hauptman. I'm not a very big fan of love triangles, but Mercy's relationship with these two men is different. She genuinely cares about them, and they her, but Mercy isn't sleeping with either of these men and is in no rush to do so. She's careful with her emotions and I think also with decisions regarding her love life. While I will always crave romance and happy endings, when an author is able to develop their characters as richly as Briggs does in a series like this , I'm more than just satisfied--I'm totally hooked. When the characters and their inter-relationships are developed slowly over an entire series, the love and emotional conflicts between the characters are even more realistic and relatable. I definitely hope Mercy finds the steadfast love and devotion of a lifetime mate that she deserves. But in the meantime, I will truly enjoy reading about Mercy and her life.
GRADE: B+
Posted by Christine at 3:07 PM