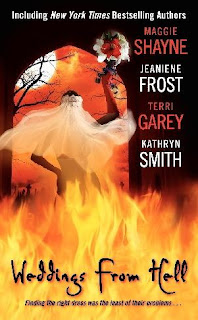 "Till Death" by Maggie Shayne.

As a young child, Kira McLellan witnesses her mother's tragic death and learns of the rumored curse set upon the females on her mother's side of the family. All her life, Kira refused to believe in curses. Until she gets called on by her mother's mysterious family for the reading of her recently deceased aunt's will and is off for Scotland to visit the family she's never met. During her stay, Kira learns more about the curse on McLellan brides that curses the women to die at her husbands had should he ever cheat on her. Kira also ends up falling in love with a long time friend of the family, Ian Stewart, and makes it her priority to break the curse on the McLellan women once and for all.

This is the first story by Shayne that I have ever read. I enjoyed Kira's character--a confident modern woman and despite her disbelief in curses at the beginning, her acceptance of ghosts and the curse was well paced. I also admired her determination to solve the mystery of the curse and to break it once and for all. Despite the appropriate pacing with Kira and the curse, however, I felt the pacing of the relationship between Kira and Ian was not at all realistic. They practically fell in love with each other just from hearing each other's voice during a long distance phone call. And when they finally do meet it was an obvious case of love at first sight. I just don't buy that. Lust at first sight? Oh yeah. But not love. Sorry. So despite the fairly neat tale of the curse on the McLellan brides, the rushed, unrealistic and sugar coated love story component of this short was less than satisfactory.

"Happily Never After" by Jeaniene Frost.
I have read both of Frost's full length paranormal romance novels in her Night Huntress series, Halfway to the Grave and One Foot in the Grave featuring the vampire huntress Cat Crawford and her vampire lover named Bones. "Happily Never After" is a short story set in the same world as the Night Huntress series, but is about Bones' trusted friend and fellow vampire named Chance and a human woman named Isabella Spaga.

A friend of Bones' from a long time ago, asks him to help out her grandchildren--Isabella and Fraizer Spaga-- who seem to have gotten into some trouble with a local mobster named Robert Bertini. Bones sends Chance to check up on the grandchildren and finds Fraizer missing and Isabella being forced to marry Bertini in order to apparently ensure the safety of her missing brother. Chance soon finds himself falling for Isabella and decides to do whatever it takes to save her from the likes of Bertini and to find her brother as well.

"Happily Never After" is a fun read. The antics of mafia wannabe Bertini and his two goons were a bit cliche, but if nothing else, it provided Isabella the perfect platform for her to showcase her sassy attitude and charming sense of humor.

Chance is a great hero. He's calm, cool, collected and confident, yet not arrogant. He's respectful and patient with Isabella and her feelings for him and will protect and save her regardless of her affections for him. Both Chance and Isabella were likable characters and their relationship was sweet. Overall, "Happily Never After" was a satisfying read both for the characters and the conflict resolution.

"Gouls Night Out" by Terri Garey.


"Gouls Night Out" is a story is about a goth styled city girl named Nicki Styx who has the ability to see dead people and how she gets involved in solving a wedding inspired murder. Nicki's redneck cousin Debbie is about get married but suddenly finds herself short a bridesmaid when she has a fight with her best friend Michelle who in turn bails on the wedding. So Debbie asks Nicki to take Michelle's place in the wedding party. Thanks to Nicki's ability to see the dead, Michelle appears to her and the two set about trying to solve how Michelle died and of course seeking justice.

This story was my least favorite story of the lot for a few reasons. One is that while I really liked Nicki and thought she was strong, smart and sassy, the author had her boyfriend show up on the scene to save her from the bad guy when she had thus far proved herself quite the capable young woman. I can appreciate the boyfriend's role in the justice part, but Nicki should have been the one to kick the bad guy's ass for sure.

I also found the story arc rather commonplace. Heroine sees dead victim; dead victim slowly remembers details of her death; heroine and dead victim work together to figure out the murder; use scare tactics to make murderer confess to authorities; dead victim is able to leave this realm to a better place; and all is good in the world. Just too simple and predictable for me--I prefer a story with more originality.

This story was also chock full of redneck mentality and lifestyle stereotyping, which might be offensive to some readers.

This story is the prequel to Kathryn Smith's Brotherhood of Blood series, which is a historical paranormal romance series featuring a band of good guy vampires whose existence is tied to the Templar Knights and the Blood Grail. When Brotherhood vampire Payen Carr discovers that his past lover, Violet Wynston-Jones is about to wed a member of the Order of the Silver Palm--the Brotherhood's worst enemy-- he crashes the wedding in attempt to stop her from saying "I do." Convinced that Payen came back because he still loves her, Violet sets out to show him not to fear love, but accept and embrace it. But it is enough to make him hers forever?

"Wedding Knight" was my favorite story in this collection. While readers who have not read Smith's Brotherhood of Blood series might not completely understand the mythology surrounding the vampires and their enemies, the story is still well developed and the conflicts are well presented. The action and tension throughout the story was realistic and developed at an appropriate pace. There were conflicts in the plot relating to both the Order as well as the hero and heroine's personal relationship, all resolving nicely within the 100 pages. Payen and Violet were both very likable characters and very hot together. I enjoyed the fact that Violet was the romantically and sexually assertive one and the icing on the cake for this couple was a perfect happily ever after ending.