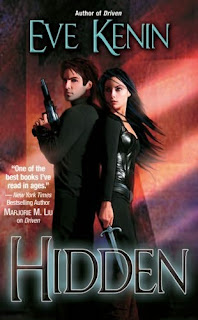 Eve's first action romance novel, Driven, takes place in the frozen Tundra of the Northern Hemisphere, called the Northern Waste during a post apocalyptic future. In Driven, we met trucker Raina Bowen and a mercenary named Wizard who worked together to take down their common enemy, the powerful and despicable businessman Duncan Bane. Having been born and raised in a lab by computers, Wizard and his sister Yuriko barely escaped the evil clutches of Duncan Bane. Their sister Tatiana never made it out and is assumed dead.
Hidden is Eve Kenin's second action romance novel written for Shomi Fiction, and the sequel to Driven. In Hidden, readers return to the Northern Waste as Tatiana has escaped from her captor Gavin Ward. Even more evil and despicable than Duncan Bane, Ward acquired Tatiana from Bane when she was barely a teen and has been abusing her emotionally and genetically in order to use her as the genome for a deadly plague he wants to use with nefarious intent. At the opening of the story, Tatiana has recently escaped from her prison at Ward's headquarters and has set out to find and destroy his research lab in the Northern Waste. The only lead she has is the name of Ward's lead geneticist--Tolliver.
Despite having lived her entire life locked away and experimented on by first Bane and then Ward, Tatiana has honed some rather amazing genetic enhancements. While she has had the ability to read the emotions and intentions of most people she comes in contact with since birth, there are other abilities that start developing only after she gained her freedom. These new abilities include the ability to withstand the frigid temperatures, see in the dark, heal rapidly from the most severe injuries and the strength to tear through human flesh and bone with her bare hands--all making her quite the kick ass heroine.
In order to make some cash to pay for food and supplies, Tatiana is on a job to reclaim a stolen ring from a pair of dangerous thieves at a remote truck stop when she crosses paths an enigmatic and alluring settler named Tristan. Tatiana then crosses paths with Tristan days later after witnessing what looks like a vigilante attack on a rabid and maniacal man in the middle of nowhere. In need of fuel for her snowscooter and hoping for some answers about Tolliver, Tatiana accepts Tristan's invitation to his settlement. Wary of the underground facility, Tatiana soon suspects that there is more that meets the eye than within this remote settlement and perhaps she has stumbled upon Ward's hidden lab.
Hidden certainly lives up to its claim as an action romance. The action is intense and often gruesome with numerous life threatening scenarios played out--all very unpredictable, and the romance is sweet and convincing. Hidden also has a strong sci fi vibe to it as the premise revolves around a genetically enhanced Tatiana and the genetic warfare created by Ward's minion Tolliver. There were a few things, however that left me questioning. How exactly did Tatiana finally manage to escape from her cell under Ward's hold? And why were her genetic enhancements only blooming after she escaped? Coincidence? Or some other factor? Why didn't Tristan ever question Tatiana's motives for finding Tolliver and his lab? Or how she even knew about it?
Tatiana totally steals the show in this story. From the beginning, the reader empathizes with Tatiana's torturous past and lack of emotional attachment. Everything Tatiana knows of human relations was learned through video holograms or from reading the emotions and thoughts of the few people she came in contact with, which doesn't say a lot as the only people she came in contact with were the vile likes of Bane and Ward or other tortured humans. But Tatiana is not weak or self pitying. She's smart, angry, and determined--not to mention she has these amazing new superhuman skills. So while I felt sad for all the good things in life she has missed, I mostly felt hopeful and excited for all that she can learn and accomplish now that she is free. Tatiana is quite endearing, actually, as she comes to understand her own emotions and figure out what love is for the first time in her life.
Tristan is definitely intriguing. While I sensed he was the good guy all along and acted with the best interests of humanity and others in mind, there was so much about him and his past that remained a mystery until practically the very end. He had this meditative way of controlling his negative emotions and often provided very profound insights to human nature. Which amusingly confused the heck out of Tatiana and her literal way of thinking.
Both Tatiana and Tristan are somewhat broken by their past, yet by the end of the story, they both learn that love is an opportunity not to be missed. Whether or not you are whole or healed.... you deserve love.
I enjoyed reading Hidden and hope that Eve Kenin continues writing action romance set in this world. I would love to see Wizard and Tatiana's sister Yuriko live happily ever after as well.
GRADE: B
Other reader reviews:
The Romance Book Wyrm
Ramblings on Romance, etc.,
Renee Reads Romance
Darque Reviews

As a side note, if I had written a review for
Eve's first action romance novel, Driven:
Grade: A