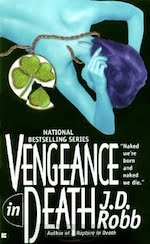 I just finished reading Vengeance In Death this morning, and to tell the truth, if it wasn't for being the hostess of this challenge, I probably would have fallen off track already because there are so many books calling me this month! However, I'm glad I felt compelled to read it, because once I started, I couldn't put it down.

Vengeance In Death starts with an anonymous phone call to Lieutenant Eve Dallas from a man claiming to be on a mission from God to murder in the name of divine retribution. He confesses to the murder of his first intended victim and ends his transmission with cryptic clues as to where the victim can be found. This begins the games this elusive, techno-savvy murderer has in store for Eve in which he sends her riddles about his victims, leaving her barely enough time to figure out the victims' locations as she and her crew race to save a life and catch the murderer.

Eve figures out rather quickly that the victims are linked to Roarke's past in Ireland and his carefully buried criminal activities. No sooner does Eve begin to explore some leads in the investigation that Roarke's long time friend, father figure and butler, Summerset is implicated as the prime suspect. Eve's moral compass is tested like never before as she tries to protect Roarke from becoming a future victim and Summerset from being framed as the murderer.

Vengeance In Death is another fantastic installment in this series. The murder mystery was suspenseful and because the murderer and the victims were so intimately tied to Roarke's past, the story was extremely personal for Eve and Roarke. As a result of the links to Roarke's past, more details about Roarke were revealed in this story. Eve and Roarke worked together on this case more so than ever before. They had a few heated and emotional arguments because of the case, which was actually good to read because it made them refreshingly normal. Of course, it was also nice that they made up each time. Eve also verbalized her love for Roarke quite a few times, which we know is rare. Not only that, but she admitted to herself and to him that she needs him, too. I loved this. Even needs to need him, and admit it to him, too. He really needed to hear it from her.

The end of Vengeance In Death was really intense. Not only was I on the edge of my seat over how the killer was going to get apprehended, but I actually choked up a little on the emotional impact of this last scene. As always, the emotions between Eve and Roarke run high as they sigh in relief over not losing each other, but in this case, there was also a small--very small, sigh of relief for Summerset. Never thought I'd see the day.


Which In Death book(s) did you read this month?

What's your take on the Eve & Summerset relationship?

I happen to love it. It adds extra fire to the home life of Eve & Roarke. Like they need more, right? Most times I find Eve and Summerset's constant sparring and jarring very entertaining. This was the case for Vengeance In Death, but in addition, I also loved how this particular story was so personal for Summerset and how it forced him and Eve to get to know and understand each other better. Even if just a smidgen. They're both so stubborn!

Enter the url to your blog post that contains the list of In Death Challenge books you have read so far with Mr. Linky below.

Thanks for playing!
Posted by Christine at 3:42 PM