REVIEW: A Matter of Class by Mary Balogh 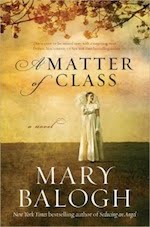 A Matter of Class is a delightful little historical romance. Prior to reading this novella, the only other work I had read by this author was the short story "A Handful of Gold" in the Heart of Christmas anthology last December. I enjoyed Balogh's story in the anthology, and when I read Hilcia's and Phyl's enthusiastic reviews for A Matter of Class, it was an easy decision to read this book. Even easier when I noted that my library had it on the shelf and I didn't have to spend hardcover price on a novella.

A Matter of Class is a story about two families who live on adjacent properties and have lived with a great deal of tension and even animosity towards each other because of simple matters of class.

Mr. Bernard Mason was born to the working class and therefore has no title. As a result of great financial success as a coal merchant along with great efforts to advance himself socially, he and his wife and his son Reginald Mason now live nearly accepted among the genteel class. Their neighbor, the arrogant Earl of Havercroft looks down upon the Masons and treats them with snobbish disdain. So much so that he even forbids his wife and only daughter, Lady Annabelle to speak with the Masons or even look at them in church. Needless to say, there is long standing petty antagonism between the families, or at least between the patriarchs.

The Earl of Ashcroft is looking at dire times. Not only is he near financial ruin as a result of a poor financial investment, but now his only daughter, Lady Annabelle Ashcroft has been disgraced by a scandal and likely facing life as a ruined woman. At this point her father would marry her to anyone who would have her.

On the other side of the fence, Bernard Mason has had enough of his son Reginald's wild, extravagant living and demands that he settle down and marry or have all his funds cut off. When Mason learns of Lady Annabelle's ruin, he sees the perfect opportunity to finally secure a title for his family and simultaneously put his arch enemy in his place.

Bernard Mason all but demands that his son Reginald propose marriage to Lady Annabelle and for once, the Earl of Havercroft agrees with this arrangement so as to spare his daughter complete ruin and save his family from financial ruin.

Marriage appears inevitable but would it really be enough to overcome matters of class between these families? And is there any hope for love between Reginald and Annabelle?

A Matter of Class is a cleverly written, engaging novella that was truly a joy to read. Within the first few chapters of the book, the reader is introduced to the Mason and Ashcroft families, the basis of their antagonism and their current state of affairs. Then the author begins to skillfully intersperse the current progress of the story with flashbacks to the past, slowly revealing more details about the characters and the challenges that differences of class posed on Regency England society. It is also through these glimpses of the past that the reader can't help but develop a fondness for both Reginald and Annabelle and desperately want to see them fall in love.

Eventually the chapters about the past catch up to those of the present in a clever denouement and of course, a happily ever after.

A Matter of Class is a fun and sweet romance. I enjoyed every minute reading this cleverly written little romantic tale.
Posted by Christine at 11:57 PM