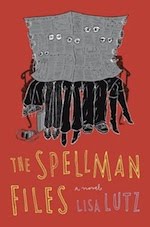 The Spellman Files is the first book in the very fun and quirky Spellman Family mystery series by Lisa Lutz. Nath and I picked up and read The Spellman Files last fall and finally wrapped up a buddy review that's posted today over at Breezing Through. Click over and check it out HERE! :)

Psst! While you're there, be sure to also check out the awesome Anti-Valentine's Day Romance Giveaway the gals at Breezing Through have going on. You can win your choice of several different romance novel prize bundles... three books in each bundle! The hard part is going to be deciding which bundle to choose from!


You can learn more about Lisa Lutz and the Spellman books at http://lisalutz.com/. In fact, I dare you to read the overview of The Spellman Files that you can find HERE, and if you're still not interested in checking out at least the first book in this series... there's seriously something wrong with you! LOL. Kidding! No, actually I'm not. ;P

Seriously, though, this series is adorable and amusing and also has some very serious elements. You're going to think these characters are wacko, but I assure you, they will grow on you and you'll become emotionally invested in each one of them in no time. Okay, maybe not David. Nah, you'll like David, too. But Isabel will definitely worm her way into your heart without you knowing it. At first you're probably going to think she's odd, obstinate, and perhaps a tad immature. You're going to want to shout at her through the pages of the book and say things like, "Nooo! Izzie! That's a bad idea!" or "Uh oh, Izzie. You're gonna regret that." or "Izzzz-iiiie" and roll your eyes. But I'm telling you, you're going to love her and root for her and want to read the whole series just like I did. The series just got better and better. Really fun stuff.

The fourth book in the series, The Spellmans Strike Again will be released on March 16, 2010 in hardcover.

AND! There are plans in the works for a movie based on the first book in the series! Yay! So exciting!

I want to thank Li at Me and My Books for recommending this series. Thank you, Li! :)

I want to thank Michelle at red headed book child for sharing the love of this series with me in comments and emails as I read all three of the currently released Spellman books AND for sharing her ARC of the fourth book, The Spellmans Strike Again that will be available on March 16, 2010. I'm so lucky! Thanks, Michelle! :)

I also want to thank nath at Books, Books and more Books --and Breezing Through, of course, for inviting me to do the buddy review with her over at Breezing Through. Thanks, nath!! It was a lot of fun discussing the book with you and I hope to do it again sometime. Maybe for Curse of the Spellmans. ;)
Posted by Christine at 10:45 AM