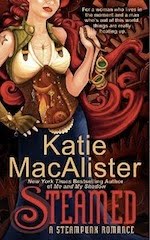 Steamed is the first novel in a new steampunk fantasy romance series penned by romance author Katie MacAlister. Jack Fletcher is a nanoelectrical engineer. When his sister Hallie pays him a visit in his lab and nonchalantly fiddles with some equipment as she chats away, the two get accidentally zapped to an alternate reality onto a steam driven airship. Jack and Hallie are disoriented and bewildered as they come to in the cargo hold of the airship Tesla. The captain of the ship, Octavia Pye with startling red hair and her cast of strange and colorful crew members are equally confused over the discovery of these two uninvited guests in their ship's cargo hold.

The airship Tesla is en route to deliver cargo to the emperor during a turbulent political time, so the captain and crew are very weary of Jack and Hallie's unexpected presence aboard the ship, suspecting them to be spies on some nefarious mission. As this is Octavia's maiden voyage, she's determined for her trip to go smoothly without a hitch, and Jack and his sister certainly throw things off course for her in more ways than one. The sparks fly between Jack and Octavia from the get go, and Jack is seemingly having the time of his life in this new world attempting to seduce Octavia while trying to learn more about this woman and her world.

I haven't read any of Katie MacAlister's work before, but I was vaguely aware that her stories tend to be light hearted and humorous. So in fairness, I should have expected a similar style with Steamed, yet it still took me a few chapters to get into the story and not expect something serious and romantic, which I think is what I was looking for. Nevertheless, I made a quick adjustment of my expectations and was set my mind to just have fun with the story. And it was fun to read at times. Steamed is a fun story with some funny dialogue, some slapstick-type action scenes and quite a few colorful and quirky characters. The characters and the world were interesting, but neither were developed or explored nearly enough to meet their potential.

The relationship between Octavia and Jack was entertaining at times because of their differences in shall we say, their 'dating' customs, but really, I never felt convinced that there was ever a true romance between them. What they had was merely physical attraction and perhaps a curiosity about someone so different.

The steampunk world had a lot of political struggles going on in the background, and I had been left wanting for more explanations of each faction's strifes and goals. Again, there was potential there, but the conflicts were never quite explained thoroughly enough and too many questions were left unaddressed. Hopefully the author will reveal more about the world and the motives of the various political leaders in future installments of this series.

Steamed may appeal to fans of Katie MacAlister's stories and others who are looking for a humorous, lighthearted adventure in an airship, but for me, I'm going to start over in my quest for the perfect steampunk romance. Right now I've got my sights on the following steampunk novels.

I've seen the first two at my library, and the third comes highly recommended from several book blogging friends. The Iron Seas series? Well, it's Meljean Brook. I can predict with confidence that she's going to deliver the depth, seriousness and romance that I'm looking for.

What are your steampunk recommendations?
I prefer the books to have a romance or at least romantic elements, but I'm open to any book suggestion, really, so suggest away!