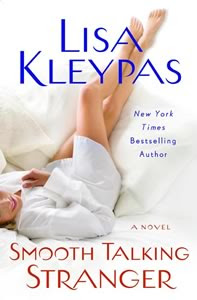 Smooth Talking Stranger is Lisa Kleypas' third contemporary romance novel featuring the lives and loves of the Travis family. All three of Lisa's contemporary novels are told from the first person point of view of the heroine and each story is in essence the story of the woman's journey to discovering her true self and the road to her happily ever after. Smooth Talking Stranger is the story of Ella Varner and how her world gets turned upside down and rocked all over the place by her sister's newborn son Luke and even more so by the man her sister implicates as Luke's father--one of Houston's most eligible bachelors, Jack Travis. While Smooth Talking Stranger is not without a few flaws and inconsistencies, the story is completely absorbing, entertaining, very sweet and definitely romantic.

Ella Varner has come a long way in creating a safe haven for herself since distancing herself from her atypical upbringing within a very dysfunctional family. Ella and her sister Tara have been through a lot of craziness in their childhood ever since their father walked out on the family when they were very small. Their mother, Candy Varner is not an easy person to live with. She's insecure, unstable, selfish and has never been a positive influence on her daughters. Ella was smart and strong enough to get out when she could and after therapy, a lot of self reflection and a whole lot of will power has created a stable, content life for herself. She lives with her steady boyfriend Dane in an Austin apartment, has a steady job writing an advice column for a city newspaper, a network of friends, and thinks she's got her happily ever after going on. Her sister Tara, on the other hand, hasn't found her way out of dysfunctional as successfully as Ella. Not that she's necessarily following her mother's footsteps, but she's definitely been struggling with finding happiness and direction.

Ella has been out of regular contact with her mother and sister for a while and one day gets a call from her mother reporting that Tara left her surprise newborn baby with her and left without a trace. Candy is now demanding that Ella come to Houston to retrieve Tara's newborn baby before she turns him over to social services. Without hesitation, and much to her boyfriend's chagrin, Ella drops everything in her life and heads to Houston to look after the baby while she hunts down Tara and the baby's father. Finding Tara proves more difficult than she expected, but their cousin gives Ella a few leads, including the tip that the baby's father is the successful businessman and much sought after eligible bachelor, Jack Travis.

Before Ella hears from her sister with confirmation whether or not Jack could actually be the baby's father, Ella confronts Jack at his workplace about his potential paternity and makes quite an impression on him as he watches her attend the baby and demand that Jack take a paternity test. Jack insists that it is simply not possible that he be the father because he's never slept with Tara, but Ella doesn't believe him. He has all rights to get extremely agitated and angry with Ella's accusations and demands, but he doesn't. He's actually intrigued by her. Ella is very different from the women Jack usually takes notice of, and while he can't quite put his finger on why, he's certainly going to find out more about Ella Varner.

Ella soon hears from her sister and gets some answers. She finds out who isn't the baby's father and what is actually going on with Tara that led her to abandon her baby. It is going to take Tara a few months before she can take back Luke, so Ella agrees to care for him until then. Back in Austin, Ella's boyfriend Dane won't allow Ella to bring Luke into their home and into their world, so Ella decides to stay in Houston in the interim. Fortunately her job as an advice columnist allows her to work remotely, and she sets up an apartment for her and Luke. Still determined to hold Luke's father accountable, she pursues all avenues. During this time, Ella bonds with both baby Luke and with Jack Travis, both of whom throw her for a loop, forcing her to rethink a lot of her views on life, love and the kind of happily ever after she's always deeply craved.

Smooth Talking Stranger is the romantic tale of Ella Varner's journey of self discovery that puts her on the path to her happily ever after. It is a very engaging and fast paced romance of a seemingly unlikely pair, but for those of you who don't like babies in your romance, be warned that Luke is an important element in this story. While his presence does not overshadow or interfere with the romance between Ella and Jack, he is still an integral part of the story and
his presence actually has an important role in teaching Ella about unconditional love.
Ella has some baggage from her past and while she thinks she has found her happily ever after with Dane, she's really just been maintaining this perpetual state of friendship with the added benefit of occasional physical release through sex. She's not experiencing passion, adventure and true love. She quickly finds out what she's missing, however, when she falls for Jack Travis. Jack is everything that Dane is not and more. He's open minded, kind, caring, possessive and passionate and although it takes a while, Ella finally lets go of safe and comfortable and takes a chance with Jack who offers her a better, more fulfilling love, the likes of which she's never known. I loved watching Ella come to realize she wants what Jack has to offer, working through her doubts that it could be something that will last a lifetime. It's a very beautiful journey thanks to Jack's patient and yet seductive nature.

While living in Houston, Ella also befriends Haven Travis, the heroine of Blue-Eyed Devil, and their friendship, although not explored in huge depths, really touched me. Both women have survived very unpleasant situations--Ella with her extremely dysfunctional family, and Haven with her abusive first marriage. Their friendship is very genuine and it allowed for some really great insights into the importance of friends whether those friends last a lifetime or they just walk through your life for a few seasons. It was a very nice touch to the story.

I thoroughly enjoyed reading Smooth Talking Stranger, but there are a few elements that kept this book from being perfect for me. One is a scene in which Ella and Jack have unprotected sex. This is completely out of character for both of them who make it very clear that they are very careful and never have unprotected sex, but then there they were! I imagine that this was the first time either one of them have ever done such a thing, because the chemistry between them was uniquely intense and passionate, something neither of them has ever before experienced. And I believed that. But yet, neither one of them said so afterward! If only Ella blurted out that she was on the pill within the few seconds right before the act instead of ten minutes after, this scene would not have tripped my radar. Or if both of them panicked afterward or something to indicate that this was completely out of character for them. Otherwise, it was an amazing scene.

Another small disappointment was a plot device toward the end of the book that forced Ella into admitting her love for Jack that seemed a bit contrived. On the other hand, it definitely added tension and emotional climax to the ending, and taught Ella the lesson that it is better to have loved and lost than to never love at all. It led to some beautiful and romantic dialogue, so I forgave the author rather easily, but I still kind of wish it came about a little differently. It also set up some rather interesting background for what I think is Lisa Kleypas' next contemporary romance featuring Joe Travis.

Smooth Talking Stranger is a fast paced, engaging and very romantic story that will grab you from the first page and not let go until the very end. I read Smooth Talking Stranger in barely over a 24 hour period, which is so unusual for me, but also a true testament to the author's talent. The story flows smoothly and effortlessly, is at times poetic, always honest and beautifully romantic. Lisa Kleypas has the wonderful ability to share a realistic and passionate glimpse into a woman's life at which she is engaged in a soul searching journey ending with the perfect happily ever after.

A big thank you to Brie from Musings of a Bibliophile who so willingly shared her ARC of Smooth Talking Stranger with me as soon as she finished reading it. And she just so happened to post her review today, too!

Thank you, Brie!
Posted by Christine at 8:26 PM