Ecstasy was never so dangerous . . . 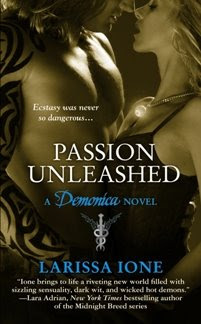 Passion Unleashed is the third book in the paranormal romance series called Demonica by Larissa Ione. The hero of each of the first three books in this series centers around one of three demon brothers who founded the first ever hospital for demons--Underworld General Hospital. Pleasure Unbound is the story of the oldest brother, Eidolon; Desire Unchained is Shade's story; and Passion Unleashed is the story of the youngest brother, Wraith.

Wraith is the bad boy of the brothers so to speak, but for founded reasons. Wraith was born half vampire-half demon, an almost impossible mixed breed. Wraith's mother was a vampire who had been violently impregnated and repeatedly raped by his post s'genesis demon father while he held her captive for the duration of her pregnancy. Once his offspring was born, the demon father took off, leaving the newly turned vampire with her young. Needless to say, when Wraith was born and it was discovered that he was not full vampire, he was considered an abomination to his mother and her entire vampire clan. Instantly he became an object of deep hatred and resentment who was only kept alive for so his mother could torture, abuse, and punish him for his very existence. Eventually he escaped, but was caught and tortured to near death by his uncle before Shade and Eidolon found and saved him. [You can read this intense and brutal tale in the short story The Reckoning that can be found in the online Demonica Compendium. You can access the book from the Demonica Compendium widget on my sidebar or at Larssia Ione's website at http://larissaione.com]. Since then, and understandably so, Wraith is a bit cold and distant. He does not get close to anyone, barely even his brothers. He does what he wishes, when he wishes, hunting, fighting, and getting laid his only priorities. He is a tiny bit discriminating with the females he lays, though. For reasons tied to his horrific past, Wraith will never feed from or have sex with a vampire or human. Ever.

At the end of Desire Unchained, Wraith went through his s'genesis and was enjoying being able to seduce as many females as possible without a care in the world . But now there's a problem. Wraith was poisoned and is now dying. With no antidote in existence, his only hope for survival is to acquire a very specific immortality charm that is in the possession of one female named Serena Kelley, who must remain a virgin in order for the charm to stay intact. All Wraith has to do, then, is to seduce it from her. The catch is that Serena is well... human. It gets even more complicated than that, in ways that I won't explain because it is all tightly woven into an intricate story arc that spins out of control right to the very last pages of this novel.

Ever since I read the first Demonica book last June, I have been anticipating Wraith's story. There is something incredibly appealing and satisfying about the love story of a tortured, lonely and misunderstood hero, and Wraith certainly fits that profile. He's the aloof brother with the don't-care attitude, causing all kinds of trouble and hardships for his brothers. Yet the truth is that he does care and throughout the first two books, the reader gets glimpses of a vulnerability and tenderness that's buried under his tough demon exterior.

Serena Kelley is a fantastic heroine and a perfect match for Wraith. If there was one human female who could turn Wraith inside out and upside down, it is Serena. She's an archaeologist--a treasure hunter, just like Wraith who travels the world in search of magical artifacts and rare ingredients for demon remedies. Serena is smart, confident, honest and knows what she wants. At 25 years old, she has successfully maintained her virginity in order to preserve her charm, but she's not completely innocent. She is a very sensual woman who has a lot to offer the right man. She is also well aware that she is being deprived of experiencing the ultimate expression of love and intimacy with another person. The sharing of body and soul with the one you love. And she craves that for the first time ever with the male who has to power to destroy her.... Wraith.

Wraith and Serena's love story is heart wrenching and heart warming. Wraith is obviously out to deceive her and starts out their relationship based on some very big lies. All the while, Serena is pretty honest and upfront with him, and as he sets out to carefully seduce her and not scare her away, he really gets to know her. And himself, too, actually. He starts falling for her... a human! Who'd have thought he'd ever fall for someone, let alone a human? But he does, and the author orchestrates it just perfectly. Every single nuance with Wraith's character, with Serena's character, and their romance is perfectly paced and completely believable. Their reactions to each other and to all that happens to them and around them makes sense and builds to a very exciting and climactic happily ever after.

The romance plot in Passion Unleashed is intimately connected to the story arc for the entire novel, as are several secondary story lines featuring familiar characters from the first two books, along with some new characters as well. Although, calling these story lines 'secondary' really does an injustice to them, for they are crucial to the evolution of the overall story arc. Once again, Larissa Ione does a fantastic job of developing an intricate plot with all kinds of unexpected plot twists and revelations that ultimately connect for a thrilling climax. And I'm talking thrilling. The ending of this story is an incredible whirlwind of action, surprise twists, and soul satisfying happily ever afters all around.

I think the huge climactic ending of Passion Unleashed provides closure for all three of the Demonica books, which makes sense since I believe Larissa Ione was originally contracted for only three books in this series. However, she cleverly slipped in an unexpected surprise toward the end of Passion Unleashed that can serve as the gateway to future Demonica books. Thankfully, Larissa's book contract has been extended and we can expect two more full length novels in the Demoncia series. Unfortunately, we will have to wait until 2010 for the next book! But wait until you find out who gets the next book! It's a doozy! ;)

Those words come from the book blurb on the back of Passion Unleashed and they truly convey the tension of the highly charged, sensual and tender romance between Wraith and Serena. You know you just have to read this intense, action packed, sexy, fun book!

I'm going to help five lucky readers get their hands on this book, compliments of Hachette Book Group. To enter for a chance to win a copy of Passion Unleashed, all you have to do is leave me a comment telling me who your favorite Demonica character is and why.

If you haven't read this series yet, read the book blurbs at Larissa's website and tell me which of the three brothers or books interests you the most. If your name gets drawn, you still only win a copy of Passion Unleashed. You'll have to buy the first two on your own to catch up!

I'm sorry, but only residents of the USA or Canada are eligible to win and no PO boxes, please.

If a winner does not reply to me with their address by Sunday, April 5, 2009 to claim their prize, new winners will be selected.