REVIEW: The Windflower by Laura London

So you never thought you'd see the day, did you? I'm finally getting around to posting my final thoughts on The Windflower, largely due to the pressure that Shannon of What Women Read has finished reading the book and anticipates posting her thoughts very soon. My apologies to the other participants in The Windflower Blogging Extravaganza for holding up the tour with my turn. All of you make horrible pirates and really should have made me walk the plank several times over by now. Seriously. No eye patches for you.

So without further ado, I present to you my long awaited final comments on The Windflower.... 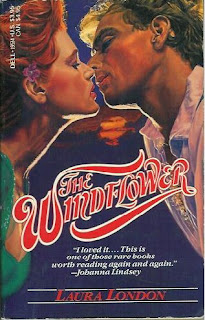 The Windflower is an historical romance set in 1813. The story starts out stateside in Virginia where our young heroine, Merry Patricia Welding lives with her Aunt who serves as her guardian since her mother passed away and her father and brother are both too preoccupied with their military efforts for the American cause against Britain during the War of 1812 to properly see after Merry.

Merry is a recreational artist, and is quite good at it, too. One of her greatest talents is her ability to draw accurate sketches of people she simply sees in the streets. Capitalizing on this, Merry's brother takes her to a local tavern at which he wants her to take careful note of some British pirates who are expected to show up there so that she can draw sketches in order to create wanted posters of them. Well, plans don't go exactly as planned and Merry makes a narrow escape from the tavern, but not before the pirate Devon Crandall corners Merry in order to extract details about her suspicious behavior and ends up stealing extremely passionate kisses with her. Passionate and mysterious, because both Devon and Merry are strongly effected by a few simple kisses.

Several weeks pass after this incident and Merry's aunt decides it is time to take her to England for a holiday, and with hopes of possibly meeting some suitable man for marriage. Well, plans don't go exactly as planned again, and shortly after boarding her ship bound for England, Merry gets inadvertently kidnapped and delivered to The Black Joke, the pirate ship of Captain Rand Morgan and his cohort, yes, you guessed it, Devon Crandall. Merry spends most of the remainder of the book as a prisoner on The Black Joke pirate ship,keeping out of harms way and inevitably lands a special place in the hearts of the crew--especially one such pirate named Devon Crandall who falls deeply for the beautiful, naive maiden, and she for him. Of course she tries desperately to not fall for him because he's a brute and an ass. And of course he tries desperately to resist falling for her because he thinks she's the lover of his worst enemy. Of course she refuses to denounce any false accusations about what she was doing in the tavern that night in order to protect her brother and his American idealist role in the war. Plus Devon isn't actually forthright with why he needs to know, either, so their game of cat and mouse ensues. Secrets and confusion between Merry and Devon are the norm for pretty much the entire novel, yet truths are finally reveled and they acknowledge their love and go on to live happily ever after, the end.

The Windflower pretty much exemplifies a lot of stereotypes of the romance genre and I can't seem to blame anyone who rolls their eyes at this novel. Merry is the classic young, naive, virginal damsel in distress who cries, flails her dainty wrists, and gets an entire crew of pirates to fall for her. Devon is the domineering, controlling, aggressive .... oh, I don't know.... jerk? I'm pretty sure the only reason I tolerated his character is because I enjoyed witnessing Merry squirming whenever they interacted, followed by her feisty, intelligent and consistently amusing responses. Their verbal banter was fairly entertaining, I must admit. In fact, I liked Merry a lot from the very beginning right through to the end. Except for one thing: I just don't get what she saw in Devon. At all. Especially after we meet the cast of colorful characters on board The Black Joke. I could think of at least three secondary characters (Cat, Raven, and even Captain Morgan!) who were no doubt more worthy of Merry's affections. They were caring, funny, intelligent, and suave. I really liked them. Devon, not so much. He was simply a brute. What the heck did Merry see in him? I never figured it out. Considering The Windflower is a romance novel, I should have been convinced that their love was well founded and I wasn't. I think Merry would have lived more happily ever after with someone else.

Aside from Merry, I have to say I really enjoyed some of the secondary characters, specifically Cat, Raven and the Captain. They had personality and character. I believed in their earnestness and felt they grew and changed just like Merry did during the short time their lives were intertwined.

The political conflicts throughout the story turned out to be more complex and interesting than I expected. The little plot twists and character revelations that unraveled as the story progressed added much welcomed depth to the story. Especially in light of the fact that the love between the hero and heroine was so shallow.

Overall, I enjoyed Merry's character and her interactions with Cat, Raven, and Captain Rand Morgan, yet the romance between Merry and Devon failed. I was never convinced that what Merry felt for Devon was really love, and in fact her relationships with the secondary characters were more genuine and believable and what held the story together. I'm glad I had the opportunity to read this popular old school romance so that I could find out for myself what the big deal is over it, but frankly.... I didn't discover any big deal at all. The token Windflower World Tour pose upon completing the read and review. Copied from KMont who copied from Ana.