REVIEW: Demon From the Dark by Kresley Cole 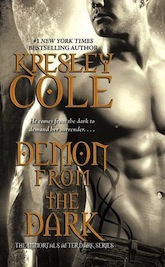 The theme of this month's TBR Challenge, hosted by Wendy the Super Librarian, is romantic suspense or paranormal romance. I've had this book on my TBR pile since it was released in 2010--I believe I won it in a book giveaway from a book blogger who is sadly no longer blogging. I've been catching up on this series in the last couple of months and really loving every book. They're SO fun!

Demon From the Dark is the 10th book in the paranormal romance Immortals After Dark series--a series in which immortal beings long thought to be mythical secretly exist alongside humans in modern time. There are numerous factions of immortal beings who collectively call themselves the Lore, including vampires, demons, valkyries, witches, furies, shifters, fey and many more. Every five hundred years, all of these factions of the Lore fight for dominance of their world in a series of events called the Accession, which is culminating during this series.

What a thrilling and nerve-wracking adventure! Demon From the Dark is the story of the witch Carrow Graie and Malkom Slaine, a demon who was transformed against his will by an evil vampire centuries ago and has since been out casted and tormented by his very existence. Carrow is a witch with strengths in three houses--enchantress, spell bounder and warrior who draws her power from the joy and happiness of others. Because of this, she has a party girl reputation but the truth is that she's pretty sad and unhappy on the inside. Malkom is extremely tormented from always being betrayed by the few people he has loved in his life and judged as an abomination by all because of his demon-vampire duality. Yet he has fiercely protective, loyal and caring tendencies.

Carrow is forced to go to the hell-like demon realm called Oblivion to find and capture Malkom in order to save both her own life and that of Ruby, the newly orphaned child-witch in her coven whom she loves like her own child. As soon as Carrow comes to Oblivion, Malkom recognizes her as his fated mate and will stop at nothing to protect her. Carrow accepts his protection as a means to lure him to a portal to their captors, but in the week that she is stuck with him, they of course come to love each other. But with all romances between immortals of the Lore, there are serious complications and obstacles that seem impossible to conquer. The fierce determination that these beings have to be with their mate is thankfully even more invincible.

I've been sweeping through this series over the last couple of months after doing a re-read of the first several books and every book that I read is just as good as the last--they're SO much fun! The stories are action packed, chock full of humor and often a little heartbreaking at the same time. The romances are seriously sexy and oh so sweet, too. Carrow and Malkom's story is no exception. She is desperate to save Ruby and will do whatever she must to keep the girl safe. I found her maternal instinct very heartwarming and Ruby's character utterly adorable. She adds such a great familial layer to this story that only children can do, which we haven't seen yet in this series. I really liked that. Malkom is such a tortured soul and works so hard at overcoming his past, which is nearly impossible given his circumstances. His efforts to do that while being so protective of and honorable to Carrow in the face of all the adversity thrown his way really mark him as noble and heroic. A lot of characters from past stories pop up in this book as the events Accession start to escalate, and some new characters are introduced as well. Demon From the Dark is a fantastic installment to this series and I cannot wait to read more as the series builds towards the denouement of the Accession business!

You can read my reviews of earlier books in this series on my goodreads page at http://www.goodreads.com/user/show/4753648-christine.
Posted by Christine at 7:00 AM