The Graveyard Book Read-Along Part I

I am finally reading The Graveyard Book by Neil Gaiman, thanks to the Read-Along hosted by Carl who blogs over at Stainless Steel Droppings during the R.I.P. VII reading event. I have had this book on my list for years. I remember Neil Gaiman was in NYC doing a public reading of The Graveyard Book on the day it was released and I wanted to attend, but just couldn't juggle it on a weekday evening. So much for regret, though, because I never even picked up the book after missing that event. I just never got around to it. Until now!

The Graveyard Book is a middle grade level book that, like all of Gaiman's work, can be enjoyed by readers of any age. Except maybe the very young--it is a bit morbid and frightening for the wee ones. The book is written in chapters, each chapter appears to be a little story of it's own, an episode in the life of a young boy named Nobody Owens whose family was brutally murdered in their home, a fate Nobody escaped as he toddled out of his house that night and into the Graveyard that would be his sanctuary.

CAUTION: This is a read-along discussion so expect some spoilers in the post and comments! Read at your own risk. 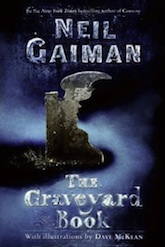 There was a hand in the darkness and it held a knife.

This is the first sentence of The Graveyard Book and it basically sets the tone for the first chapter. Grim--if not frightful and morbid! A bit shockingly so for what takes place on the very first pages of a middle grade book. I had to remind myself that many children easily identify fiction as just that--fiction and imaginary and are therefore not as bothered by something so alarming as the murder of an entire family save a young toddler as many adults may be. This is not to say that other children reading this story would not be traumatized, but hopefully that's not the case.

Chapter One: How Nobody Came to the Graveyard
As the title implies, this chapter reveals how a little boy named Nobody came to the Graveyard. One night, while the little boy slept in his crib, he awoke to noises downstairs in his home. He climbs out of his crib, bumps down the stairs and when he notices the front door ajar, he slips out into the night just as any toddler would do given the chance to wander. Little does he know that the noises he heard was a man named Jack murdering his father, mother and sister.

I have to admit I was somewhat taken aback by the tragedy that unfolded in this first chapter of a middle grade chapter book. However, I have no qualms letting my middle school child read this book--or even the Hunger Games, so I'm not really sure why murder in a middle grade book surprised me. Perhaps because it was presented in such a nonchalant manner, but then again, that is one of Gaiman's strengths and his style. Gaiman can write even the most tragic, morbid scenarios into something that sort of feels natural and with an edge of dark humor. It's as if the narrator is completely neutral about the story being told and it's up to the reader to get upset, scared, angry or even find humor in the story. How does Gaiman do that? Anyway, I felt sad for Bod in this first chapter, but he seemed quite content with his new home and caregivers. He's too young and naive at this point to realize the tragedy that's become of his family and he just goes with the flow. That alleviates a lot of worry from any distraught readers, I think.

Chapter Two: The New Friend
In this chapter, Bod befriends a young girl around his age named Scarlett who visits the Graveyard on a regular basis with her mother [the graveyard has also become a nature reserve over the years, so people do occasionally visit to walk the paths and sit on the benches.]. Bod and Scarlett become friends very easily, talking and exploring the Graveyard. At one point their curiosity gets the better of them and they end up getting into a bit of trouble exploring a particular crypt, and very sadly, their visits end. Scarlett says some very kind and meaningful things to Bod--things that I am glad someone said to him.

It was, perhaps, the first time Bod begins to think he's missing out on something not living in the world outside the Graveyard and again, I felt sad for Bod thinking he is longing for something out there, even if he doesn't quit know what it is. Perhaps this is merely a lesson of the proverbial "the grass is greener on the other side," and Bod has what he needs in the Graveyard as good as what any other child his age has, but I can't help but think Bod really needs human love and companionship. That's not to say his caregivers in the Graveyard don't truly care about him and even love him, but is it enough? Should he have more? I'm not sure.

Chapter Three: The Hounds of God
Silas leaves the Graveyard for a while to take care of some important matters and his acquaintance Miss Lupescu has agreed to come to the Graveyard every day to keep an eye on Bod, bring him healthy meals and even tutor him. Bod hates it and feels lonely, dejected and even kind of angry that Silas left him.

One evening Bod is feeling particularly disgruntled and recklessly agrees to join a group of rambunctious spirits on an adventure outside the Graveyard. What Bod thought would be a fun time very quickly turns into an awful and dangerous nightmare. He relies on some important skills Miss Lupescu taught him which end up saving his life!

This was quite a thrilling chapter. The trouble Bod gets into is quite severe and Gaiman sure paints a horrid, detailed picture of what it might be like on the other side of a ghoul-gate. Bod learns quite a few valuable lessons in this chapter that hopefully young readers pick up on, too. Lessons such as do not talk to strangers; do not get into a car (or go through a ghoul-gate) with strangers; do your homework; eat your vegetables. Things like that.

I'm really enjoying The Graveyard Book and look forward to reading the next chapters. I'm curious to see what other lessons Bod learns, how he continues to handle living within the sanctuary of the Graveyard, does he yearn for human companionship? And really I want to know more about Silas. What kind of being is he? Where did he go and what did he learn when he left the Graveyard in Chapter three?

Did you like to read scary stories or watch scary movies when you were a kid?

How about now that you're an adult?

I read some Stephen King novels as a teen and even watched my share of horror movies. My first scary movie was Alfred Hitchcock's The Birds that I watched by accident when on regular TV when I was maybe 8 or 9 years old. Maybe it was an ABC Saturday Afternoon Movie [are you old enough to remember that feature?] or something but I remember being really scared and upset afterwards for a long time. That didn't stop me from watching more scary movies, though, and I did so for many years. However, I no longer like scary movies--definitely no horror and not even most thrillers. I will sometimes watch a psychological thriller at home on the sofa with my husband. Definitely not alone. I think it's because I've worry enough about real life nightmares happening in the world that I don't need to add fictional ones to my head!
Posted by Christine at 11:38 PM