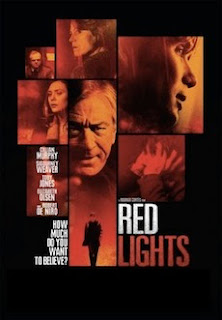 I'm not a fan of horror movies anymore, yet decided to participate in the Peril on the Screen component of the R.I.P. VII event hosted by Carl V. of Stainless Steel Droppings. After scrolling through countless horror and thriller movies on Netflix recently, my husband and I agreed on Red Lights, a 2012 psychological thriller directed by Rodrigo Cortéz starring Sigourney Weaver, Cillian Murphy and Robert De Niro. Neither of us were familiar with this film prior to spotting it on Netflix, but we figured it had to be decent in light of the casting, right? Eh. Not so much.

Dr. Margaret Matheson [Sigourney Weaver] is a research psychologist who along with her assistant physicist Tom Buckley [Cillian Murphy], work to debunk fraudulent psychic phenomena, revealing the science behind the tricks that frauds use to deceive the public. Thirty years ago, world renowned psychic Simon Silver [Robert De Niro] went into reclusive "retirement" after his biggest critic died at one of his shows. Now Silver has come out of retirement and is once again luring crowds of believers to his shows, tons of media attention as well as the attention of psychic researchers. Matheson, who is normally aggressive in her quest to discredit the biggest fakes including Silver, wants nothing to do with Silver and is determined to stay away from him. Her assistant Tom Buckley feels otherwise and is determined to reveal Silver as a fraud, which quickly becomes a dangerous and deadly task.

There were moments of tension, suspense and unexplained phenomenon in this film, but I kept expecting a build up of something big and mysterious that just never quite got there. The ending was seriously anticlimactic. Not only was the resolution of the conflict very flimsy, but the denouement wasn't even exciting. No special effects or dramatic music to even help it along some. A single episode of the X-Files is more engaging than this film.

Posted by Christine at 7:00 AM