Note: There are slight spoilers in this review based on events and character introductions that occurred in previous books. 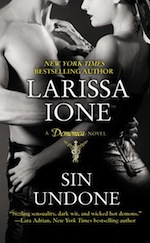 Sin Undone takes place only a couple of weeks after the events of the previous book, Ecstasy Unveiled and SO much is going down in this one starting in just the first couple of chapters.

As introduced in the previous book, Ecstasy Unveiled, Sin and Lore are twin Seminus-human half breed demons and half siblings to Eidolon, Shade and Wraith who all work at the demon hospital they founded, Underground General Hospital [UGH]. Female Seminus demons simply do not exist, making Sin's existence a complete anomaly of nature, which has deeply affected Sin's sense of worth and acceptance.

Unlike pure Seminus demons who are born with demon gifts of healing, Sin and her twin were born with gifts of death and illness. Lore has the ability to kill a victim upon contact with the glyph on his right arm and Sin has the ability to infect a victim with any disease or illness, deadly or otherwise, simply by touch. They have been freed from their servitude upon the death of Lore's master Detharu, but now Sin has inherited the den of assassins as her own. She's doing a lousy job of it, though, turning away jobs, and now her assassins are out to kill her in order to inherit her den, as killing a master is the only way a den can be passed on to a new master.

In Ecstasy Unveiled, Sin infected a turned werewolf or warg with a deadly virus as part of an assassination mission that got interrupted. The warg didn't die immediately and unfortunately survived long enough to spread the virus to other wargs. The virus is extremely contagious with an extremely short incubation period and now there's a deadly epidemic wiping out wargs faster than Eidolon and his medical team can develop a vaccine.

The wargs are desperate for a cure for this new 'Sin Fever' and want Sin brought justice for starting this deadly epidemic--justice being permanent imprisonment or death. The Warg Council calls on the UGH paramedic Conall Dearghul, a half vampire-half werewolf dhampire, to retrieve Sin for punishment, which would be lifetime imprisonment or death. After being abused and enslaved all her life, Sin will not be imprisoned ever again.

In the panic over the Sin Fever epidemic, tension escalates between the born wargs and the turned wargs to the point where they are on the cusp of war. This is because the born wargs view Sin Fever as a means of eradicating turned wargs from the population, whom they consider inferior, and now they have the perfect excuse to initiate the genocide of turns wargs before the virus jumps species.

In the meantime, Eidolon and his medical staff are racing to develop a vaccine for Sin Fever before all hell breaks loose. During his research to develop a vaccine, Eidolon has a breakthrough when he discovers a virus-antibody connection when he combines blood samples of Con--who is infected by exhibits no symptoms-- and Sin's blood. Eidolon suggests Con feed from Sin so that Sin can monitor the antibody production and hopefully use her gift to reverse the effects of the virus. If she can do this, the wargs will be saved and they will have prevented war. This request basically invites sexually charged encounters in the name of science for Con and Sin, which sounds just fine and dandy for a dhampire and Seminus demon. The problem though, is that Con never drinks repeatedly from the same female because he is too susceptible to becoming addicted to her blood, eventually resulting in her death. And after one intense and urgent tryst with Sin a few weeks ago at UGH, Con already feels the signs of developing an addiction to her.

Sounds like I gave away the whole book, but believe it or not, all of the above has been set up before page 55 of Sin Undone, so you can imagine how crazy intense this book is! Sin is basically watching her back for the Warg Council or her own assassins, racing to help Eidolon find a vaccine for Sin Fever, struggling through her guilt over starting the epidemic all the while resisting feeling any emotion for her brothers and definitely fighting her attraction and affection for Con. Con is determined to crack the cold surface of Sin and get her to feel something, but ends up getting more than he bargained for--the love of an intense female, which in the end is the last thing he should be doing when he finally gets called to lead his dhampire clan as alpha at the cusp of the dhampire breeding season.

Sin Undone is such an intense book--a whirlwind of tense politics and power struggles between species and at the center, two characters who have emotionally isolated themselves from family, friends and lovers for so long. In the midst of this dangerous time for demons and wargs, these two characters are able to break down the walls they've maintained for so long and find love for the first time. Of all the characters in this book, Sin totally steals the show. She's a fascinating and complex character with a lot of issues--justifiably cold, tough and independent, but under the specific circumstances of this book and in the company of a male who sees her for who she is inside, Sin learns how to feel, how to trust her feelings and to take a chance on expressing the love and compassion that she keeps buried deep inside. Sin's emotional journey alone makes this book a worthy read, but throw in seemingly hopeless conflicts, fierce action, awesome secondary characters and of course a sexy romance and you have a paranormal romance that simply cannot be missed.