March Madness for Romance & A Giveaway!

Basketball isn't the only place where you can find some March madness! DABWAHA is a bracket tournament for romance novels created and hosted by Jane from Dear Author and Sarah from Smart Bitches Trashy Books. It's a tournament of books in which 64 books published in 2011 among 8 different categories are put up against each other bracket-style and voted on by readers over approximately 2 weeks until a single champion is crowned.

Visit the DABWAHA site to learn how the tournament works, which books are competing, the rules and prizes. Of course, while you're there, fill out your own bracket and join the fun. You have until Wednesday 11:59 am EST to submit your picks.

I submitted my bracket today and was faced with some tough decisions! I struggled with quite a few of my choices--even for the books with which I'm familiar. In fact, the hardest part was when some of my favorite books ended up facing off against each other and I had to choose! Like Dragon Bound by Thea Harrison up against Kiss of Snow by Nalini Singh?! Gah! Can both win? In the end, I simply tried to take my preferences out of the thought process and just speculated which book voters would more likely choose. 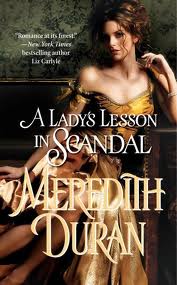 But speaking of my favorites. .. Meredith Duran is an historical romance author who wrote one of my all time favorite romances, The Duke of Shadows, published in 2008. I have read and thoroughly enjoyed all of her books to date, including A Lady's Lesson in Scandal which I was pleased to discover is the readers nomination for the historical romance category in this year's DABWAHA tournament!

Last year, I had the wonderful opportunity to meet Meredith Duran in New York City after the literacy signing at the RWA National convention in June. She wasn't participating in the signing event, but she so graciously offered to meet up with me anyway and signed two copies of A Lady's Lesson in Scandal for me! Did I mention she's super cool as well as immensely talented? I kept one copy and the other was meant for a giveaway on my blog, but I never got around to it, so I'm doing it now. :)

Giveaway Rules:
To enter for a chance to win, you must have left at least one comment on my blog in the past, leave a comment in this post about anything related to DABWAHA or Meredith Duran's books.

Giveaway ends on Friday, March 16, 2012 at 5:00 pm EST. Open in US only. Winners have one week to claim their prize or another winner will be chosen. Please leave an email address in your comment if it is not easily found on your blog or profile page. 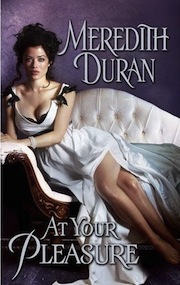 At Your Pleasure by Meredith Duran will be released on March 27, 2012.

Glittering court socialites and underworld cutpurses alike know that Adrian Ferrers, Earl of Rivenham, is the most dangerous man in London. Rivenham will let nothing—not the deepening shadow of war, nor the growing darkness within him—interfere with his ambition to restore his family to its former glory. But when tasked by the king to uncover a traitor, he discovers instead a conspiracy—and a woman whose courage awakens terrible temptations. To save her is to risk everything. To love her might cost his life.


Lady Leonora knows that Rivenham is the devil in beautiful disguise—and that the irresistible tension between them is as unpredictable as the dilemma in which Nora finds herself: held hostage on her own estate by Rivenham and the king’s men. But when war breaks out, Nora has no choice but to place her trust in her dearest enemy—and pray that love does not become the weapon that destroys them both...


Visit Meredith Duran on her website at www.meredithduran.com for information about her books including excerpts, stories behind the story, research, reviews and where to purchase her books.


p.s. In case you were wondering... DABWAHA = Dear Author Bitchery Writing Award for Hellagood Authors
Posted by Christine at 11:46 PM