Note: This book was given to me by the author in exchange for an honest review. 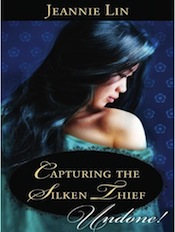 Capturing the Silken Thief is an historical romance novella set in the infamous North Hamlet of Changan during the Tang Dynasty in China 823 A.D. It is in this infamous entertainment district where scholars studied during the day and indulged in wine, courtesans and brothels in the night.

Yang Jia-jing is a poor song girl trained to play the pipa in The North Hamlet. She is essentially in eternal debt to her troupe master unless she finds the means to buy her freedom. Jia believes the means to her freedom lies in a valuable book of poems that has been stolen by young scholar in the district. If she can only get her hands on the treasured book, she can finally buy her freedom.

Luo Cheng is a farm boy from an outlying province who is diligently studying for the imperial exams. He has already failed them once, so this is his last chance to prove himself and earn the title of a ranking official.

When Jia mistakes Cheng for the scholar who is in possession of the treasured book, the two end up searching for the book together. Their escapade sparks a passion between them that could either lead to defeat or a path to a new life for one or both of them.

Capturing the Silken Thief is adventurous albeit brief romp through an ancient city where lies and theft bring together two similar souls who cannot help but be drawn to one another. Jia is a determined young woman who creatively uses her wiles to do what's necessary to achieve her goals, but is taken off guard by this honest, young scholar whose aspirations for freedom are really not much different from her own. Cheng is an equally determined individual, whose mischievous side is brought out by this intriguing thief who has easily slipped into his heart. Jia and Cheng compliment each other in an easy, natural way, but with a bit of delicious tension-- perfect for bringing these two together in this short tale of love and adventure.

The story is well written and perfectly paced, but unfortunately too short! While Jia and Cheng's story never felt rushed, I would have loved more page time and consequently more character development with these two lively, well-matched characters. Capturing the Silken Thief is a charming tale for fans of historical romance, one that should not be missed for its unique setting and time period.

Visit author Jeannie Lin on her website at jeannielin.com for more information about her books.

Ms. Lin's next book will be My Fair Concubine, also set during the Tang Dynasty China and is scheduled for release on May 22, 2012 in print and on June 1, 2012 in ebook format.
Posted by Christine at 5:01 PM