Approximately two years ago I did something completely out of my comfort zone and joined an outdoor running group. I had just started biking a month or two prior, but aside from that my regular workouts for several years consisted of pretty much the same four fitness classes at the gym, four days a week. I was not a runner. I would run once in a blue moon if I had to, but it was definitely not my thing. I decided to give the running class a try anyway, in order to support the instructor [who was also a friend] who was trying to get this new class off the ground.

So I joined this running group.

I admit I was not very good at it.

In the beginning, I could barely run 2 miles [3.2 K] before I'd have to slow down to a walk to catch my breath. But I stuck it out and thanks to the efforts of the instructor, the support and positive encouragement from the small group of awesome women in the class, I slowly improved. Five weeks later, everyone in our group signed up for a local race and I ran in my first ever race on November 28, 2009. It was a 5 Mile Race [8 K] and I finished in 1:01:46. It was a slow 12:21 / mile pace and I recall having to power walk a couple of times to catch my breath, but I did it. I was very proud of myself for putting myself out there doing something new and something that was downright hard.

I decided to run that same race this year so I could see how much my fitness level has improved over the last two years. 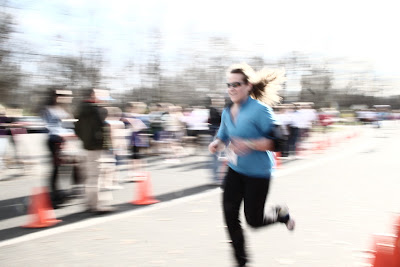 That's more than 10 minutes faster than my time two years ago! My pace was decent at 10:15 / mile, but this actually placed me in the bottom 20% of the 800+ people who participated in this race. Ugh, that stinks. There are a lot of really fast runners out there, people! But this is about me, not them, so whatever. Besides, I look SUPER FAST and HAPPY in this [blurry] picture, don't I?


And that's what really counts. Not the super fast part, although that is nice. The HAPPY part.


Get out there and try something new. Challenge yourself. Work for it. Make yourself healthier and happier. It feels good.  :)