From scratch and made from practically nothing!

Are you cooking Thanksgiving dinner this year?
If yes, and you struggle with making homemade gravy, give my method a try. It took me years to learn how to make a decent gravy. Hopefully this recipe will save someone that kind of trouble. ; )

For years, gravy was one of my greatest challenges in the kitchen. Just ask my husband--chances are he'll mention my worst gravy attempt--red gravy. I have no idea what I thinking with that recipe. It really didn't even sound great on paper! I think I was just desperate to find some recipe that would actually show me the way to gravy success.

It used to be my habit to buy a can or jar of commercial gravy to have on hand in case my homemade gravy failed--which it usually did--and then I'd quickly open and heat the canned stuff in the microwave. I finally got the methodology down however, thanks to a few good articles in my favorite cooking magazines and haven't bought commercially prepared gravy in many years.

Now I can make gravy on the spot in about 10 minutes or less with or without the juices from a roast. In a pinch, I can make gravy in a small saucepan with just butter, onion, broth, salt and pepper and my secret ingredient--soy sauce, which is great to do for left overs, swedish meatballs or even sliced turkey or roast beef from the deli. However, gravy is extra special and flavorful if you do use the pan drippings from a roast. And the method is exactly the same for any kind of roast--beef, chicken or turkey. And if I can do it... so can you.

I always start the gravy towards the end of the cooking time for the roast and after my sides are just finished and being kept warm. This way I can focus on finishing the gravy while the roast rests and I can serve everything pipping hot.

For this post, I roasted a cut up chicken, seasoned with salt, pepper and sprinkled with dried sage in a large baking dish at 350F for about an hour or until the juices run clear when pierced with the tip of a sharp knife. I usually check the thickest part of the chicken thigh, near but not touching, the bone.

About ten minutes before the roast is expected to be done, start making the gravy. Don't worry if your timing is slightly off as you can stall the gravy after step three and keep it heated at low heat while you wait for the roast to be finished.


Makes 6 servings. Double or triple the recipe for a large roast such as a whole turkey.

1. Heat the canola or other cooking oil and the butter in a small saucepan over medium-low heat until butter melts.

2. Add the onion, season with a generous pinch of salt and pepper and cook until the onion softens and begins to brown slightly. 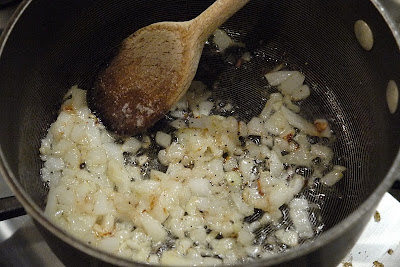 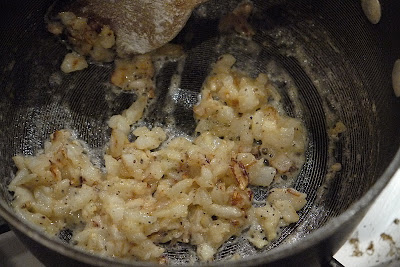 4. Slowly add the water or broth, stirring gently but with rapid movements to prevent the flour from lumping and until the gravy is slightly thickened. You can add additional water here, if necessary to get the desired thickness, but adding the pan drippings from the roast in a few minutes will thinA whisk works well for this step. I'm usually too lazy to dirty another utensil and just use the spoon.

3. Add the soy sauce and stir until well blended. 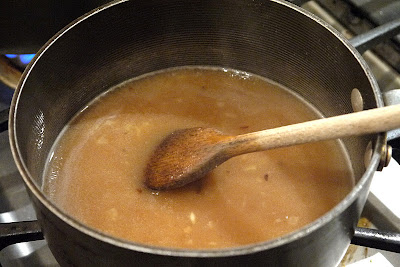 If the roast is done, immediately continue with step 4.

If the roast isn't yet done, keep the gravy on low heat until roast is done and removed from oven. Then proceed with step 4.

4. Remove roast from roasting pan and set on cutting board to rest before carving. Using a heat safe spatula or spoon, scrape up the browned bits in the roasting pan to dissolve into the drippings.

5. If you have a gravy separator [hi Santa!], use it to separate the fat from the drippings and pour the drippings into the gravy, leaving the fat behind, and stirring the gravy until well combined.

6. If you don't have a gravy separator [like me], make a disposable one using a quart sized freezer bag like this:
i. Place an open quart size freezer bag inside a 2 cup measuring cup. 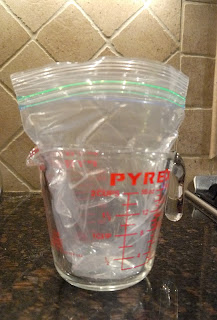 ii. Carefully pour the drippings into the freezer bag. Let stand a minute or so and the fat will rise to the top, separating from the drippings. 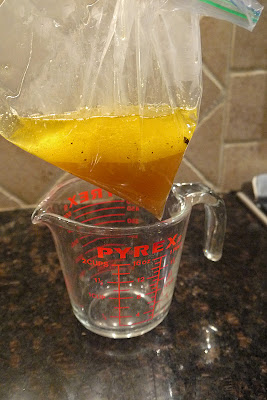 iii. Seal the top of the bag and while holding bag over your gravy, carefully partially snip the corner of the freezer bag but NOT ALL THE WAY OFF! You're just making an opening for the drippings to pour out and you don't want plastic bag in your gravy. Not appetizing.

iv. Let the drippings pour into the gravy, stopping when the fat is about to pour out. Quickly flip your bag over so the fat doesn't leak out and you're holding the bag with the snipped corner upright. Discard the fat in the bag. 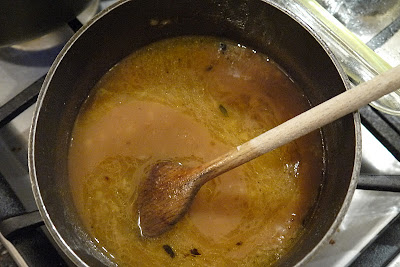 7. Taste your gravy for proper seasoning and add a bit of salt, pepper or a dash of soy sauce, if necessary. 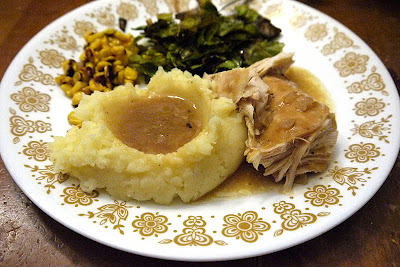 Are you a gravy lake maker?

I always made gravy lakes as a kid and every once in a while I still do it... just for old time's sake. : )
Posted by Christine at 7:06 PM