REVIEW: Until There Was You by Kristan Higgins 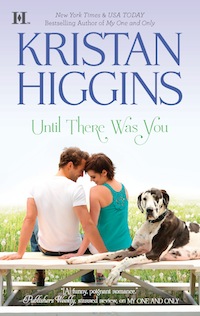 I'm wearing circles under my eyes all this week because I stayed up way too late the other night reading Until There Was You by Kristan Higgins. I was glued to the pages and could not put it down until I finished!

I've been a fan of Kristan Higgins' novels ever since I read Catch of the Day a few years ago. I've since read--and loved-- five other books by Kristan Higgins books, including her latest book, Until There Was You, which was released earlier this week on October 25, 2011. [I still have to read Fools Rush In and Just One of the Guys]. I wasn't at all surprised at how much I enjoyed Until There Was You because I adore Ms. Higgins' quirky, yet familiar characters and down-to-earth story telling--the layers of humor, familial issues, female drama and those sad moments of life that we never forget and how they shape who we are-- all wrapped into a charming romance and tied with a satisfying happily ever after ending. All of which is consistent in all of Kristan's books.

Thirty-four year old Cordelia "Posey" Osterhagen owns a salvaging company in her hometown of Bellsford, New Hampshire. Posey was a very shy, skinny and awkward teenager and consequently doesn't have many great memories of her high school years. In fact, she was at her lowest back in high school when her heart was broken by her long time crush and high school bad boy, Liam Murphy. Posey is a kind, generous and well adjusted adult now and happy enough in life. She has a great business, a loving family, a handful of close friends and even has a boyfriend of sorts. Until Liam Murphy shows up in town after all these years, that is, widowed and raising a teenage daughter on his own and as attractive as ever. His arrival sends her heart in a tailspin and Posey knows right away that she has to distance herself from him before she falls unrequitedly in love with him all over again. As if she ever stopped...

Liam Murphy had a troubled family before he moved in with his uncle and attended high school in Bellsford all those years ago. Once in Bellsford, girls were constantly throwing themselves at Liam and he took advantage of it. Until he fell for the smart, pretty and popular Emma Tate, whom he followed to California after high school. Emma got pregnant and she and Liam married and became parents at a young age. Fifteen years later, Emma dies from leukemia and a few years after that, Liam decides to return to Bellsford with his teenage daughter, Nicole so she can be closer to her grandparents.

While Posey has matured and moved on from high school, she still has some insecurities--mostly about her body image, a bit caused by some family dynamics and in general, she tends to herself short in a lot of ways. I think these are things that most women can relate to at some point in our lives.

Women still hit on Liam wherever he goes, much to his annoyance [except Posey!], but he's not the same person he was as a teenager. He's matured and has learned a lot about love and loss. Not to mention how becoming a father has changed him in ways he never imagined. Despite all his fears about parenting all by himself, and knowing first hand what teenage boys are like, he's responsible, attentive and tries so hard to understand and be there for Nicole. He's ultra protective of her, but truly a great dad. Liam's relationship with his daughter is definitely one of the strengths of his character.

Despite Posey's attempts to put a wide berth between herself and Liam--they continuously cross paths and rekindle a tentative friendship that they sort of had back in high school when he worked in her parent's restaurant and slowly begin to see each other for the person they have each become. Both of them have clearly been affected by their pasts and haven't quite gotten over a lot of their teenage insecurities, but over time they kind of show each other how to see themselves in a different light, move on, live and love. They're there for each other in ways they both truly need and deserve. It was simply heartwarming to see Posey and Liam at ease with each other, having fun and finally being loved for just who they are.

I just loved reading Until There Was You--it's entertaining and heartwarming. There are numerous little side stories threaded throughout Posey and Liam's story involving their friends and family that tie the story together in a really fun, but also meaningful way. All of those little subplots reveal details about Posey and Liam's character and how they see themselves. Posey and Liam are on a soul searching journey of sorts as they figure out who they are, where they belong and what kind of life and love are they worthy of, and in the end, how to fight for it. Most of all, it's a story about a second chance at love and how we all deserve a happily ever after. Until There Was You is a charming story that shouldn't be missed.

Visit author Kristan Higgins on her website at http://kristanhiggins.com/.

Ms. Higgins' next novel, Somebody to Love is coming out in May 2012. This new romance will brings us back to the same town in which Maggie and Malone from Catch of the Day live and I hear we get to see snippets of them again! I can't wait!