REVIEW: The Greyfriar by Clay and Susan Griffith 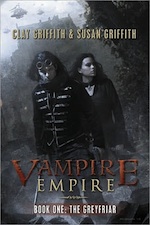 Think you've had enough of vampire fiction? You may want to reconsider and give this one a try. The Greyfriar is a the first book in the steampunk fantasy Vampire Empire trilogy written by husband and wife author duo Clay Griffith and Susan Griffith. After thousands of years of dormancy, vampires inexplicably emerged from their hiding places and swiftly massacred scores of humanity, irrevocably changing the demographics of human life and technology on the entire face of the earth. The Greyfriar story begins a century and half after the emergence of the predatory vampire clans with humans and vampires on the brink of war. Princess Adele, the daughter of the emperor of Equatoria, the largest human nation, is sent to tour the outskirts of human territory when her airship is attacked by vampires. The airship crashes and in the chaos of the battle that ensues, the princess is rescued by The Greyfriar -- the legendary and mysterious slayer of vampires and defender of humans. The Greyfriar has sworn to protect Adele and return her to Equatoria, which is no simple task when the vampire empire's most powerful clan is hunting for the princess so that they can use her as a political pawn against Equatoria. Adele's journey quickly becomes more than a mere physical journey home. She is literally fighting and fleeing for her life within vampire territory and inevitably learns more about vampires than probably any other human on Earth. She also learns some very interesting things about herself--things that have her questioning her very own views of the world and consequently, her role as Princess and heir of the Equatorian Empire.

The story is a fast paced, action packed adventure teeming with classically terrifying vampires, political strifes within and between empires, personal adventure and a touch of romance--all set in a fascinating and epic steampunk alternate history. Princess Adele and the Greyfriar are compelling characters, both of whom grabbed my attention immediately upon introduction and for whom my affection grew with every turn of the page. The story is certainly focused on the events that serve as political catalysts for war between the empires, but it would be remiss to say the story is not also a personal one. The relationships Adele forges during her journey home are equally tender as they are strong and may possibly be what saves both empires from future destruction. The Greyfriar is thoroughly entertaining. I loved this story and am terribly anxious to read the next book in the trilogy, The Rift Walker, already available now.

The Greyfriar is the only full length steampunk novel that I've read during Steampunk Challenge hosted by Rikki on her blog The Bookkeeper.

I did also read a steampunk romance novella that was absolutely fantastic. That story is "Here There Be Monsters" by Meljean Brook in the Burning Up anthology, which includes additional [non-steampunk] stories by Nalini Singh, Angela Knight and Virginia Kantra.


"Here There Be Monsters" is a prequel story to Meljean Brook's Iron Seas series. It is, in my opinion, extremely challenging for authors to write really stellar short stories, particularly in the romance genre, but Meljean has once again met that challenge in spades. The world building is impeccable and fascinating, the plot clever, the characters diverse and the romance is both believable and memorable. A romance for which the characters had to really fight, too! Now I'm looking forward more than ever to reading the first full length novel in this series, The Iron Duke. A task I must attend to ASAP as Heart of Steel--book two in the Iron Seas series, comes out in just a few days!