Happy Halloween!  I hope everyone had a fun and festive day today. I have to admit that the freak snow storm we had here on the east coast this past weekend has thrown us for a loop and Halloween wasn't as exciting or festive as it has been in the past.
Our town has an area of barely 5 square miles and we had 100 trees and over 240 power lines come down in roadways, creating hazardous conditions and knocking out power for many people. This snow storm wasn't particularly violent nor did it produce that much snow. We got maybe only 2-3" of snow, but it was very heavy and wet. Which again, isn't particularly noteworthy except for the fact that most of the trees still have most of their leaves, giving the snow a lot of surface area on which to fall and accumulate. The branches just couldn't bear that kind of weight and huge tree limbs were snapping everywhere. It was very dangerous out there!

Schools were closed today, bringing our total school closures for the 2011-12 school year to three and and it isn't even winter yet! [The first two were in September due to hurricane Irene]. Right now schools will have a delayed opening tomorrow, but there's a possibility it will turn into another closure by morning! Any more days off and they'll have to take days off our spring break in April. Ugh. :(

As for Halloween festivities, the girls went trick-or-treating today, so at least there was some Halloween spirit around here. And alas, now there's a ton of candy around here... 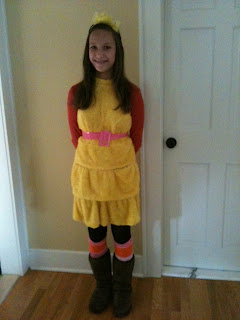 My youngest dressed up as Big Bird from Sesame Street this year. One of her friends went as Cookie Monster. You can't quite see it in the photo, but she has Big Bird eyes and a beak on her headband. Very cute. 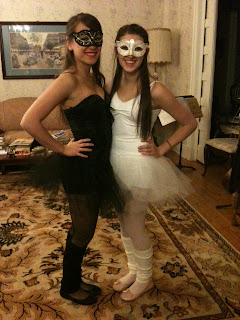 My teenager dressed up as the Black Swan and her friend was the White Swan. They put the costumes together all on their own. They purchased one or two things and everything else was borrowed or from their own collection of dance wear. Very pretty!

Now my biggest challenge will be to ignore the presence of Reese's Peanut Butter Cups in the house. 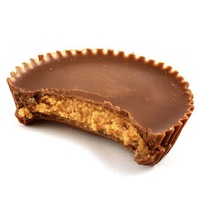