Interested in joining the Challenge? Anyone is welcome to join in at any time of the year at wherever in the series you currently are. See the sign up post HERE

After missing three months of the challenge, I finally read an In Death book this month! I don't know what happened that I couldn't get into the mood to pick it up before, but once I sat down and read the first couple of chapters, as usual, it was tough to put down. I hope this is the beginning of a new groove and I keep up with a monthly read from here on in.

How did you do?

CHALLENGE PARTICIPANTS:
Link up any In Death posts you made this month here. If you made a post on your blog whether it be a review or commentary, please grab the link to your post and enter in the Mr. Linky below along with your name so we can find each other's posts easily.

If you're reading or rereading without documenting it on your blog, let me know in the comments which book(s) you read in this month. This will also help me keep track of who's eligible for the challenge giveaway this month!

REMINDER: In order to be eligible for the challenge giveaway in April 2011, you must have read four In Death books between January 1, 2011 and April 30, 2011 and have documented that you have either on your own blog, on goodreads [please leave a link to your profile if we're not already friends there] or you can let us know what you read here in the comments of the monthly In Death Reading Challenge posts. 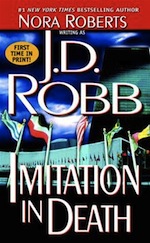 In this installment, Eve and her team are on the hunt for a murderer who is choosing his victims so that he imitates the madness and methods of famous serial killers from the past, including Jack the Ripper, the Boston Strangler and more. The only lead he leaves behind is a note on each victim addressed personally to Dallas. By tracing the source of this high end and illegal, un-recycled stationary, Eve has a shortlist of suspects to investigate.

I found this murder plot fairly interesting. Obviously not because the crimes were so unique--they're copy cat murders, after all, but I found it interesting to learn so much about the different suspects personal lives in the process of the investigation. Each suspect had very unsubstantial alibis that led Dallas to investigate further in their lifestyles to try to verify their whereabouts during the times of the crimes, catching the suspects and their family members in all sorts of lies. Which of course, led to some very interesting other revelations about their personal lives and potential motives for murder. I wasn't exactly sure who the killer was for most of the book, but my gut instinct proved correct in the end.

As always, I enjoyed the personal components to the story as Eve's relationships with her colleagues and friends and of course, her marriage to Roarke continue to evolve. I know I've mentioned it before, but I really adore the rapport between Eve and Peabody and how well they know each other. Peabody isn't as timid at pointing out Dallas' shortcomings, either.

For example, in one scene, Dallas tells Peabody that they will be returning to the U.N. to speak with one of the suspects who happens to be a very powerful politician who did not appreciate being questioned for murder. So much so that he filed a complaint against Dallas to her superiors.

I also continue to get a kick out of Eve's uneasiness regarding anything outside of NYC. Eve and Roarke are in New L.A. researching an older murder case with the same MO as her current case in New York and Eve finds herself outside her comfort zone in such a sunny, laid back city such as New L.A.

"Can't figure out why anybody lives out here," she said. "Just because they've had the big one doesn't mean there's not another big one just waiting to flatten them."
"Nice breeze though," Roarke commented. "And they've certainly battled back he smog and noise pollution."
"Whole place feels like a vid, you know? Or a VR program. Too much peachy, pinky, white. Too many healthy bodies with perfect smiling faces on thop of them. Creeps me."
"And I just don't think you ought to have palm trees waving around in the middle of a city. It's just not right."
"This should please you then. The building you want appears to be suitably shabby and unkempt, and the locals seem to be satisfactorily shady."
She sat up, stifled a yawn, and looked around.
Only about half the streetlights were working, and the building itself was dead dark. Some of the windows were riot-barred, others boarded. Several people skulked and slithered around in the shadows, and in one she spotted an illegals deal winding up.
"This is more like it." Cheered, she stepped out of the car. "This thing got full security?"
"It's loaded." He put the top up, engaged the locks and deflectors.
"Her flop was on the third floor. Might as well poke around since we're here."
"It's always a pleasure to poke around in a condemned building where someone might stab, bludgeon, or blast us at any moment."
"You've got your kind of fun, I've got mine." She scanned the area, selected her target. "Yo, asshole!"

I'm lacking creativity for our discussion topic this month, so I'm going back to the old AutoChef thing. I'm still stumped by how it all works. Having a "stocked" AutoChef is frequently mentioned. Exactly how does one stock their AutoChef? With fresh ingredients? Fully prepared meals that are fresh? Or frozen? Also, I'm under the impression that AutoChef's aren't that big. I suppose there could be different sized units--small ones for your office that maybe just have coffee and maybe a snack or two. Like a mini vending machine, right? Okay, fine. But what about the ones that produce freshly prepared full course meals? Those AutoChefs have to be pretty big in size, right? It stores and cooks the stuff. Or not if you order salad. How do they even know what dishes are available in there? How does this thing work?! Anyone else wonder obsess about this?


Don't forget to link up and thanks for keeping up with the challenge! :)