Books In the Movies

So much for getting my blogging groove back last week, huh? That plan backfired. I have nearly 1000 posts in feeds that remain unread--yikes! I think I'll be doing a lot of skimming, but I really want to catch up on what's going on with everyone and what you've all be reading and so on. As for me, reading has been kind of slow this month (what in the world have I been doing??), but I have read two really wonderful books that I hope to post about in the very near future. Needless to say, I miss blogging and interacting with all of you. I hope everyone's been well... happy, healthy and reading lots of great books! 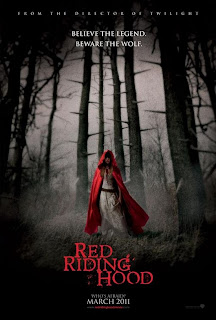 Last weekend my little girl turned twelve. I can hardly believe it. To celebrate her birthday, she had a dinner, movie and sleepover party. Originally we planned to see the Justine Bieber movie, but it was no longer playing in any of our local theaters by last weekend, so I was spared. :o Instead, we saw Red Riding Hood. As a fan of fairy tale retellings, I was actually looking forward to seeing this one, but a little leery when I noted it wasn't getting such good reviews. Turns out I really liked it! I thought it was suspenseful enough without being too scary or gruesome and the romance part was subtle enough to not overpower the fact that this story is indeed a grim fairy tale--not a Disney romance. Although there was one scene for which I wished I had octopus arms so I could cover each of the girl's eyes. No nudity, but it was suggestive. Thankfully it lasted all of 30 seconds or so.

One of my favorite parts of going to the movies is seeing all the previews. For once, I walked away wanting to see almost all of the previewed movies, several of them based on popular novels that I have not yet read.

The first was Water for Elephants by Sara Gruen. I have seen this book everywhere over the last couple of years from bookstores to Target to the library, etc., and more recently when my book blogging friend, Michele told me she recently read it with her book club and loved it. Now that I saw the preview for the film version, I finally want to read the book, too!

Another preview I saw was for the movie Something Borrowed based on the same titled 2005 chick lit novel by Emily Giffin. Hilcia read and reviewed this book several months ago and because she liked it, I thought I might give it a try even though I was hesitant because of the nature of the story. Basically the main character of the story is in love with her best friends boyfriend-fiance. You know that's just setting up for heartbreak and disaster, right? It looked like it in the movie, too. Frankly, I'm still hesitating about the book and the movie.

Have you read Something Borrowed by Emily Giffin? What do you think? 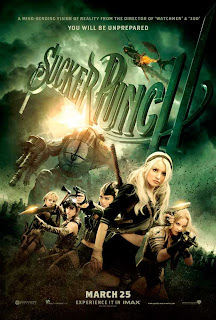 The third preview that grabbed my attention--although this one is not based on a literary work-- was for an upcoming dark fantasy film called Suckerpunch. Have you heard about it? It looks really bizarre, but that's kind of its appeal, I think. Set in the 1950s, a girl named Babydoll had been horribly abused and gets admitted to a mental institution where she transports herself into her own fantasy world to search for a way to escape the hospital. I'm not sure if the fantasy world is real or in this girl's head, but maybe it doesn't even matter. The special effects look amazing and the whole package looks like a strange, far-fetched, but thrilling ride. Of course the twelve year olds in the movies with me all thought Suckerpunch looked creepy and even my teenager gave me the weirdest look when I told her I wanted to see it. Apparently, you have to be a cool grown up like me to be suckerpunched by psycho girls in weird outfits, excessive makeup and wielding fantastical weapons while fighting their way through some grim alternate reality in order to escape institutionalization. Who knew?


Suckerpunch will be in theaters March 25.

Who else wants to see it?

I'd also really like to see the latest film adaptation of Jane Eyre by Charlotte Bronte, but it seems it's only playing in select theaters and none of those select theaters are in my neighborhood. I'll most likely wait until it's available to rent from redbox or netflix.

Another book to movie adaptation that I'm looking forward is Beastly by Alex Flinn that opened earlier this month. The book was one of my favorite young adult reads of 2010. I'll probably end up renting this movie down the road as well.

What book to film adaptations are you looking forward to?