Note: This review is based on the reading of an ARC of Christmas Eve at Friday Harbor that was passed on to me from a friend. 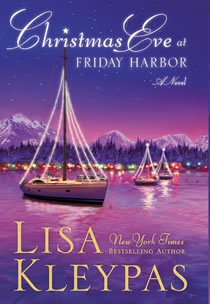 Six months ago, the Nolan brothers' sister Victoria died in a tragic car accident. A single mother, Mark became the legal guardian of her young daughter Holly upon her death. Not exactly prepared for parenthood, Mark accepts his responsibility as Holly's guardian and is determined to do his best by her. He convinces his younger brother Sam to help him out and Mark and Holly move into Sam's big, old Victorian house for a while. The agreement is that Mark will help Sam with the restoration of the house while Sam helps Mark out with taking care of Holly. Alex has always been rather distant and closed, but has been even more so in his recent unhappy and troubled marriage.

Traumatized by her loss, Holly hasn't spoken a word since her mother's death, despite being under the loving care of her Uncle Mark. Now the brothers find Holly's letter to Santa asking for one thing for Christmas... a mom. Mark recognizes Holly's need for a mother figure in her life and thinks he can and should provide her with that. And why not? His girlfriend Shelby is very nice. He and Shelby have a very comfortable relationship and she would do just fine. Yet there's something warm, comforting and magical about the interesting and insightful woman from the toy store, Maggie Collins. Will Holly get her Christmas wish? Better yet, will Mark Nolan know the magic of love when he feels it?

Christmas Eve at Friday Harbor is an adorable little story about opening your eyes to the magic of imagination and love discovered in unexpected places and the willingness to take a chance at finding happiness. There aren't any huge misunderstandings or major conflicts in the story. It's a simple feel good story about family, hope and love.

The Nolan brothers didn't grow up under the example of a healthy marriage between their parents nor did they have particularly warm or close relationships within their family. Yet the love of a six year old little girl can melt hearts and soften the most determined of bachelors. And maybe even draw the crankiest of uncles around for the holidays.

Maggie Collins learns a little something about love, hope and family in this story, too. Unlike the Nolan brothers, Maggie comes from a big family full of love and laughter so she already knows about that part and appreciates it very much, too. But Maggie is a widow who lost her husband to a difficult battle with cancer, so she also knows what's a stake when you open yourself up to the hope of a future life filled with love and happily ever after. She doesn't want to have to ever have to go through that again so is content to let her big family be her comfort and leave romantic love out of the picture for good. The magic of love, however, is stronger than Maggie's resolve to not fall for Mark Nolan.

Christmas Eve at Friday Harbor is a very sweet and heart warming holiday romance. It's a quick, light read, nowhere near as much plot or character substance as Ms. Kleypas' previous contemporary novels, but enjoyable nonetheless. I can't imagine anyone reading this novel and not enjoying the hours spent in Friday Harbor with these characters, watching the Nolan brothers come together out of love for this little girl, hoping Maggie finds the strength to love again, and seeing Mark and Maggie falling in love along the way. It's impossible not to feel good about this little story.

As soon as you're finished reading Christmas Eve at Friday Harbor, you're going to want to read the stories of the other two brothers, Sam and Alex Nolan. I'd say ask Santa for the next book in the Friday Harbor series, but I'm afraid we're going to have to wait for next Christmas for that wish to come true.

Visit author Lisa Kleypas at her website http://lisakleypas.com.
Posted by Christine at 3:05 PM