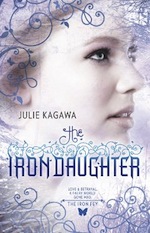 I originally thought this week's library loot was going to be short and sweet with once again, just one book to report-- The Iron Daughter by Julie Kagawa. It is the second full length novel in Ms. Kagawa's Iron Fey series, the first of which is The Iron King. I read The Iron King a month or so ago and enjoyed it tremendously. The ebook novella Winter's Passage is the second book in the series, followed by The Iron Daughter. The series is an artful blend of contemporary teenage life and dark fairy tale, a little bit of romance and perhaps a subtle touch of steampunk. The whole Iron Kingdom thing... pretty cool.

That was the extent of my library loot until last night, that is, when I stopped by the library very briefly to return Room, which was very good, by the way, and not nearly as depressing or tearful as I expected. But really... who's kidding who? Although I have done it on occasion, let's just face facts and admit that it is nearly impossible to go to the library just to return a book without borrowing another. Or two. Or three. Or ... you get the idea. On my way over to browse the shelf of new books in my library, this cover caught my eye from the young adult section: 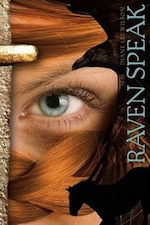 Then in a matter of three minutes, I had the following young adult books in my arms as well. I don't know what came over me. 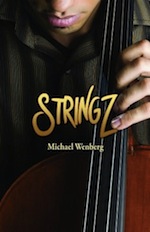 Stringz by Michael Wenberg
A story of a teenage boy named Jace Adams who has great talent and passion for the Cello, but has a hard time fitting in anywhere namely because he's always the new kid. His mom is always changing jobs, always searching for a better life, moving every couple of months. The only constant in Jace's life seems to be his cello. Maybe this move to Seattle things will be different. 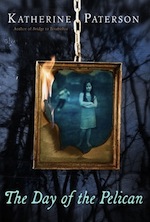 The Day of the Pelican by Katherine Paterson

A story about an Albanian family who struggle for safety and survival in a refugee camp in Kosovo in 1998 and who ultimately immigrate to the United States. 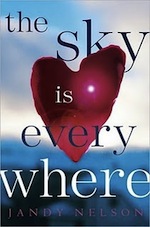 The Sky is Everywhere by Jandy Nelson

Because Angie liked it. Enough said. Seriously, though, I keep coming across very passionate reviews for this book, so I must see for myself. Another novel about a teenager who is passionate about music and playing an instrument. In this story, Lennie Walker has always lived safely and happily in the shadow of her vibrant older sister, but when her sister dies suddenly, Lennie struggles with her grief and with suddenly taking center stage in her own life. 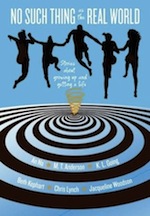 No Such Thing as the Real World by An Na, M.T. Anderson, K.L. Going, Beth Kephart, Chris Lynch and Jacqueline Woodson

An anthology of short stories about teenagers who find themselves dealing with "real world" issues for the first time in their lives.

I checked out this armful of books and promptly left. I'm quite sure I was inside the library for all of eight minutes. Amazing how many books you can loot in such a short time. Now if only I can find the time to actually read all these books! ;)

Are you a quick, impulsive library looter who typically comes home with more books than you intended?


Or do you go to your library with at least a mental list of what you want and come home with exactly that?

I'm more of the latter type-- looking up the books I'd like to read on the library's online catalog and either reserving them that way or expecting to check out the book on my next trip. I occasionally pick up other books that I see at the library while browsing the shelves, but not nearly as impulsive as I was last night with this collection of young adult books.
Posted by Christine at 11:45 AM