Fall is here. The days are short and cool now and the growing season is definitely winding down in this zone 6 region of New Jersey. The farm down the street still has some fall vegetables in the ground including some lettuces and plenty of hardy fall greens such as collards and beets, but tender vegetables such as tomato plants won't survive a frost, which could occur any day now. My surprise late blooming cherry tomato plant has several clusters of tiny green tomatoes, and I'm starting to doubt they're going to make it to maturity. I'll try to encourage it to hang in there a few extra weeks by covering the plant with a sheet at night to keep it warm. Don't laugh! All the garden experts say to do this!


If you're unfamiliar with the term, 'putting by' refers to the process of preserving or saving an abundant supply of a crop for future use. For someone who didn't even tend a vegetable garden this season, I had quite a productive season of preserving summer's bounty. I visited three different 'U pick' farms throughout the season to pick strawberries, blueberries, and two different varieties of raspberries. I also ordered extra basil and red peppers through the co-op for preserving for the winter.


Here's a look at what I preserved this season: 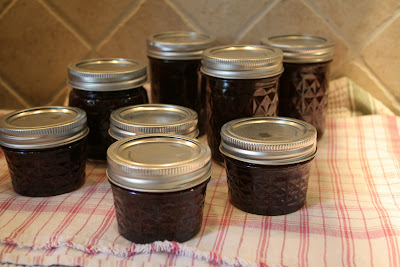 This is a photo of the strawberry jam I have left... 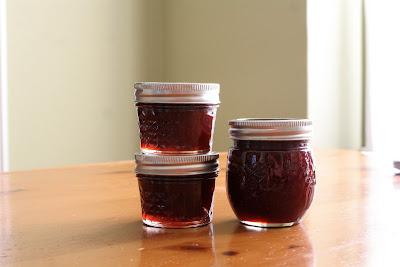 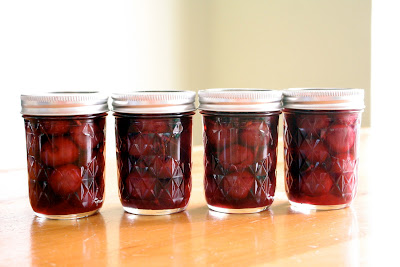 Don't these jars of cherries look gorgeous? I came across this recipe for rum soaked preserved cherries and boozy cherry molasses (not pictured but oh so good!) from Rebecca of the Foodie with Family blog while on the Tasty Kitchen forum. I love the way these jars of cherries look and thought they'd be a fun, novel treat to use to make martinis or even serve over ice cream. They're really, really delicious and were incredibly easy to make. 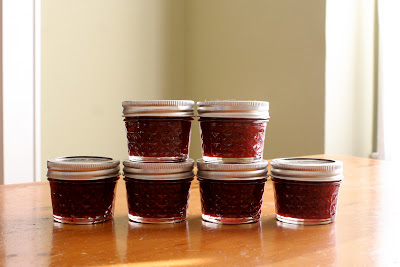 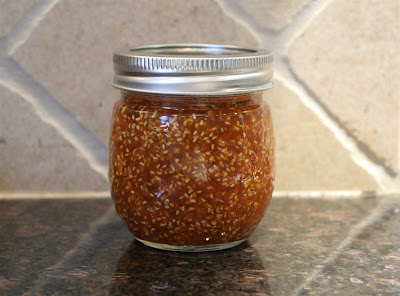 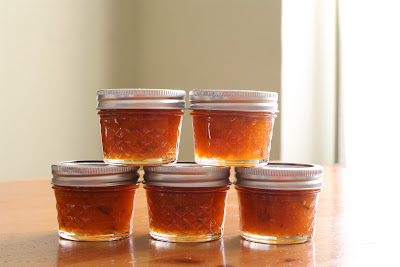 I made these spicy preserves to serve as a snack with cream cheese and crackers, but I also tried it blended with some dijon mustard as a glaze for pork roast and it was delicious.


I spent weeks researching the food chemistry of preserves for this recipe that I created and fretted about the proper ratios of acid, sugar and pectin since all three of these play an important role in not just the flavor and consistency of the jam, but also in preserving the fruit against spoilage. Hopefully my recipe is safe for consumption. ;p 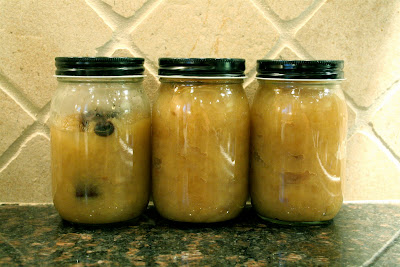 Homemade applesauce is SO EASY to make and tastes a gazillion times better than any kind you can buy at the store. 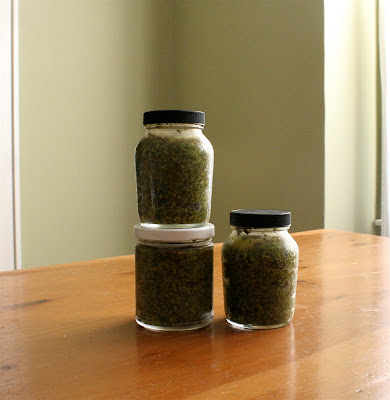 I was never a huge fan of pesto until I tried my friend's pesto several years ago. I asked her what was in her pesto that made it taste so good and was surprised to learn that it wasn't what she added, but what she didn't add that made her pesto so good. The secret was not adding Parmesan or other cheese to the pesto. I learned that although I happen to really like Parmesan cheese... I just don't like it my pesto. I spent the rest of the summer experimenting with blending basil, garlic, olive oil, nuts and sometimes parsley, until I came up with my signature recipe. Now every summer I make sure I make several jars of pesto for the freezer to get me through the winter. A little bit goes a long way, so hopefully these three jars, plus one that made it to the freezer earlier in the summer, will be enough to last us until next season. 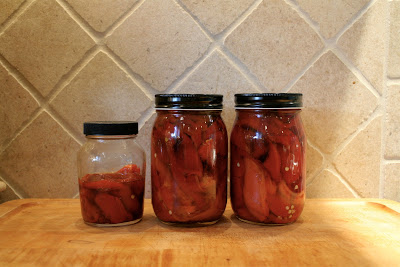 Roasting red peppers is an easy way to preserve a bumper crop of red peppers for the winter. Delicious on a grilled turkey panini with some pesto. 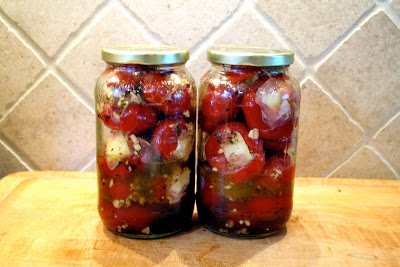 These hot cherry peppers came from that box of red peppers I special ordered from my organic co-op back in September. I had asked for sweet red bell peppers, but discovered about two dozen hot peppers thrown in the mix, so decided on making a gourmet appetizer out of them. This recipe for stuffed hot peppers is made by wrapping cubes of provolone cheese with prosciutto, stuffing them into hollowed out hot cherry peppers and marinating in olive oil, vinegar with minced garlic and dried oregano. I used a combination of white balsamic and red wine vinegars for the marinade.


I also prepared about four half quart freezer bags of frozen blueberries and frozen sliced red peppers to use throughout the year. The blueberries I use in pancakes, muffins and other baked treats, in smoothies and sprinkled frozen right on my cereal or plain yogurt for breakfast. The red peppers I'll use in stir fries, fajitas and in stews. Once their frozen, you don't really want to eat them raw because the texture isn't so appealing as they defrost, but you could if you really wanted to, I guess.


It was my intention to make dozens of jars of jams to give as Christmas and Hanukkah gifts and still have enough for my own family to enjoy throughout the year as well. I made the mistake, however, of leaving the jars out on the kitchen counter or dining room table for a few weeks. Why was this a mistake? Because every time a friend came by and spied them, she not so delicately hinted that she wanted one right then and there and didn't want to wait for Christmas. Now my gift giving stash has been dramatically reduced and I may have to make a few more jars of something between now and December. I'm thinking of cranberry sauce, apple chutney or maybe even a citrus marmalade. Any ideas?


What foods do you preserve?
{canning, freezing, or other preservation method...}


Which would you rather receive at Christmas or Hanukkah:
cranberry sauce, apple chutney or orange marmalade?

Posted by Christine at 2:35 PM

Labels: in the kitchen, preserving