Welcome to the 9th monthly round up post of the In Death Reading Challenge.


Link up any In Death posts you made this month here. If you made a post on your blog whether it be a review or commentary, please grab the link to your post and enter in the Mr. Linky below along with your name so we can find each other's latest In Death posts easily.


If you're just keeping a running list of the books as you read them, grab the link to your list post and enter in the Mr. Linky so we can recognize your success this month.


If you're reading or rereading without documenting it on your blog, let me know in the comments which book(s) you read in this month. This will also help me keep track of who's eligible for the challenge giveaway in August.

BOOK REVIEW(s)!
After being late finishing my monthly In Death book two months in a row and noticing a drop in participation, I was considering suggesting we all take a breather from the challenge for a month or two. Maybe we've been overdosing on the goings on at Central and a break would give us the space we needed to crave more of Lieutenant Eve Dallas and the NYPSD. But then I went ahead and caught the bug and read the next three stories in the series and I nearly opened a fourth. I don't know what happened, but I just wanted to keep connected to Eve. And Peabody, too! I'm telling you, that girl's personal life just gets more and more interesting. LOL!


"Interlude In Death" novella by J.D. Robb
Book 14
This story takes place off planet while Roarke accompanies Eve to a law enforcement conference at which Eve is a guest of honor. Of course, she gets pulled into a murder investigation, but what was interesting about this one is that she's not primary. Can you imagine Eve trying to solve a murder in which she's not calling the shots? Fun stuff. 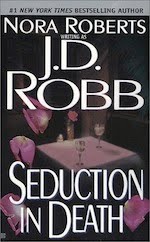 Seduction In Death by J.D. Robb
Book 15
The murderers in this book are playing a deadly game using online chat groups to meet beautiful, intelligent young women luring them with promises of romance. They use date rape drugs on the women before murdering them. All murders affect Eve tremendously, but the nature of these murders is tearing Eve apart. 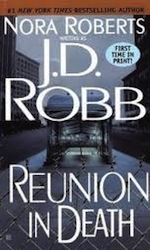 In this book, Eve and her team are investigating the murders of wealthy middle aged men with no apparent connection to each other. They quickly determine who the murderer is--a woman whom Eve helped put behind bars nearly a decade prior who got out of jail on good behavior. Turns out she's been busy watching and waiting and scheming some serious revenge. Eve's investigation brings her to Dallas, TX to interview the suspect's step father, which is where Eve was found traumatized and orphaned as an 8 year old child. Roarke accompanies Eve to the room of the hotel where she last lived with her abusive father, which was extremely difficult and emotional for Eve to revisit her past like that. Difficult for Roarke as well.


Next up is Purity In Death. I may just read it earlier this month than later because it's been two weeks and I miss Eve and Peabody!


I think one of the reasons that I got the In Death bug this month is because it was a busy month for me with the start up of school and so forth, and these stories are great to read when you've got a lot of other stuff going on. You don't need to learn background information about the core characters because you know them already, you don't need much for world building after the first couple of books, the murder investigations are smart and suspenseful, but not so complicated that you have to concentrate so hard, and all of the personal interrelationship stuff is so genuine. You can just pick up the next book and straight away you're among friends and following Eve along her investigation.


My question this month is what drives you to pick up the next In Death book off your shelf, whether it be a first time read or a re-read?