Win a copy of MIND GAMES or DOUBLE CROSS by Carolyn Crane! 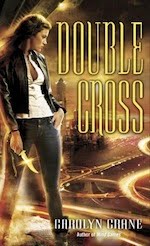 Double Cross is the second book in this fascinating, inventive and unique urban fantasy trilogy featuring the quirky Justine Jones. I read Mind Games back in April and found it just as creative, fun and sassy as I expected based on what I know of Carolyn's online personality and writing style.

Justine Jones is the heroine in this trilogy, and I use the word heroine loosely. Oh, she doesn't have a dark or evil side and isn't even that dangerous, really. She's just a regular kind of gal. If you consider someone with extreme hypochondria who can't keep her fears at bay as normal, that is.

Justine's extreme hypochondria is like a commodity to the eccentric and powerful mastermind Sterling Packard who takes up permanent residence in the Mongolian Delites restaurant. Talk about strange. He promises Justine relief from her extreme hypochondriac inspired fears if she joins his team of disillusionists-- a team of quirky misfits who fight the paranormal criminals in Midcity, USA.

Justine develops interesting relationships with both this disillusionist mastermind Sterling Packard and the dashing Midcity Chief of Police, Otto Sanchez all the while trying to save the relationship she has with her boyfriend Cubby and trying to figure out what the heck she's doing. Throw in cast of fellow misfit disillusionist crime fighters and you've got one mind bending whirlwind of a story.

Double Cross promises to be just as fun and fascinating as Mind Games as Justine Jones continues to wrestle with her conscience over the whole disillusionist stint while Midcity is terrorized by scary-assed serial killers.

How can you not be intrigued by The Justine Jones: Disillusionist trilogy?

Well, here's you chance to win one of FIVE copies of the upcoming release, Double Cross or one of a couple of copies of the first book in the trilogy, Mind Games!

Click over to Carolyn Crane's blog, The Thrillionth Page and enter the drawing to win!

The contest is a Happy Weekend Instant Contest and ends tomorrow, Saturday, September 18 at 10 am CST!

In the meantime, entertain yourself with the trailer for Double Cross: 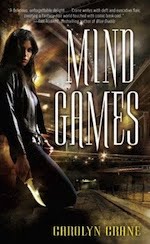 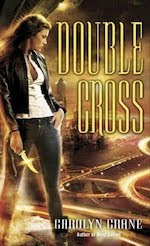 You can also visit Carolyn Crane at her author website at http://authorcarolyncrane.com/.
Posted by Christine at 4:45 PM