In the beginning of the summer, I started a Project 365 on Flickr. If you're not familiar with what that is, it's basically a photography project in which you challenge yourself to shoot and post one photograph every day for 365 days straight. Completing a Project 365 is also on my list of 101 Things to do in 1001 Days.
My teenage daughter and I started it together on her last day of school back in June. We thought it would be a fun project to do together and we'd be able to keep tabs on each other's progress. Well, it is fun... it was fun... when I actually did it, anyway. More on that in a minute.
My daughter is doing brilliantly with her project--both in her commitment and in her composition. I think she has some serious photography skills for someone who has only been behind the lens for a little over five months. She's very creative and takes some really amazing and beautiful photos--especially portraits. Really. See for yourself.
I, on the other hand, have pretty much failed on my first attempt at the project. I did okay with the first couple of weeks--18 days to be exact, but then fell behind in uploading my photos. Then I started to miss days without even picking up my camera, and soon I was so far behind that I lost hope of ever catching up. At first I tried to deny that I quit, because I never actually decided to quit, but the evidence was pretty clear that I had... whether I intended to or not. So I'm starting over and today is day one of my new Project 365. 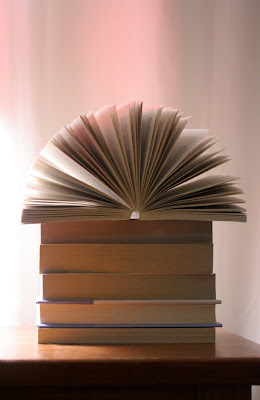 This is my first photograph in my new project. A stack of books on a bedside table is such a welcoming, comforting sight.
You can visit my photostream HERE. Let me know if you're on flickr, too!
Wish me luck---I need as much as I can get! ;)
Do you like photography? What is your favorite subject to photograph?
I imagine most people take the most pictures of their friends and family. I do that, too, but also take a lot of photos of plants, bugs, animals and scenery in general. I also take a lot of photos of food with the intention of sharing recipes on the blog, but I never seem to get around to posting them!
Posted by Christine at 11:43 PM