I mentioned a several weeks ago that my eldest daughter, who is a freshman in high school this year, made the volleyball team. The season is quite short, but no less intense with practices every weekday since late August, a few Saturday practices, and games 2-4 days a week. It's hard to believe the season will be over by this time next weekend.

Today we hosted a little pumpkin party for the team at our house. The team of fifteen girls crowded around the dining room table wearing fake vampire teeth and carved pumpkins.

One of the girls brought a white pumpkin and carved it in the likeness of a volleyball. Isn't it great? 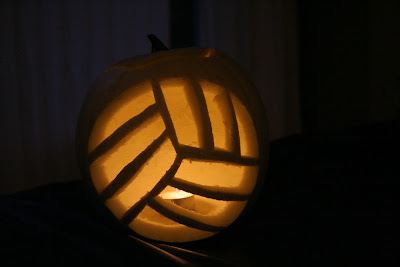 Pumpkin seeds were saved for roasting: 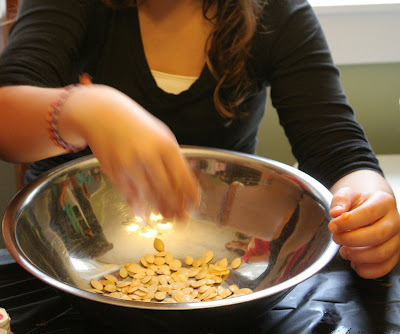 Yummy treats were served, including these very delicious pumpkin cookies made by one of the moms that had both milk chocolate and white chocolate chips in it. Soft and cake-like. Mmmm. I've got to get that recipe! 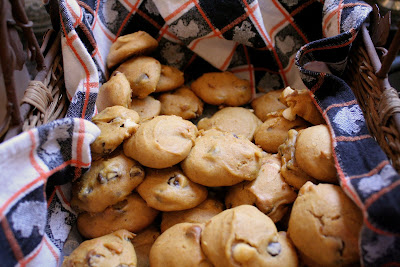 Despite the fact that it's been rainy and unseasonably cold here for the last several days, the girls headed outside to toss set and bump a volleyball around in the yard after the rain had stopped. So dedicated.

By the end of the afternoon, we had this adorable team of pumpkins: