About 10 years ago, I joined an organic produce co-op in my area called Purple Dragon Co-Op that provides its members with a diverse selection of quality, seasonal organic produce purchased directly from local and regional farmers. The founder of the co-op basically acts as the distributor or liaison between local and regional organic farmers and the members by purchasing a selection of produce from the various farms based on what's available and also making sure the biweekly selection offers a wide variety of produce. Produce from more distant farms is purchased when items such as bananas are simply not grown in our region or when our area farms are not in season.

The co-op is made up of numerous groups in communities throughout the area--I believe there are about 60 right now. Each group receives enough produce to be divided into 15 equal shares. Every other week, boxes of fresh produce that were harvested and packed at the farms just a day or two prior are delivered to the groups' pick-up locations-- which in my case, is my co-ordinator's garage. My group's co-ordinator also happens to be a close friend of mine and it's through her that I discovered the co-op many years ago when our first children were just babies. Members of the group then take turns scheduling a delivery date to come to her garage at 9 am to sort the food into the fifteen equal shares for each member and get a monetary credit that day for "working" the co-op.

A few years ago I took a break from the co-op and gave up my spot for a year or more when home life got really hectic and I found I was wasting food that spoiled before I got around to cooking it. Then in the summer of 2008, I helped my friend out by being a sub in her group when members went away on vacation. I realized how much I missed the diverse selection of produce that came in the share and how fresh everything was. Not to mention it made me realize I wasn't buying and therefore eating the same quantity of vegetables on my own than when I was in the co-op. Since the co-op groups are designed for exactly fifteen members, there is often a wait list to get into the group in your area. Lucky for me, by the end of that summer there was an opening, and I was able to rejoin as a regular member again. So with my renewed interest in the co-op and the fact that I have a gorgeous new kitchen that's so much more fun to cook in, I'm more excited than ever to be a part of my organic co-op again. 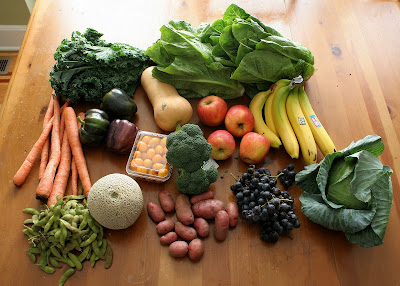 If you brought home this share, which item would appeal to you the most?
Is there anything you haven't tried before?
Which would you like to see a recipe for?
Posted by Christine at 4:28 PM