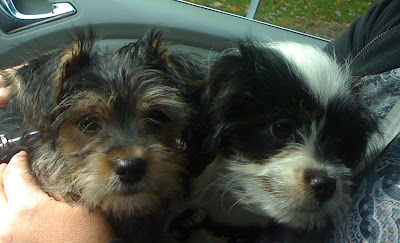 No, we did NOT get puppies! As much as my girls would be in heaven with a puppy, much less two, we have four cats and that's just four cats too many more than enough for us. I will not be suckered in to adopt a puppy.

Other people, however, are much easier to sucker. Enter my friend.
There's a family in town doing this amazing thing of fostering puppies that have been rescued from puppy mills while they await adoption. Well, would you believe my friend let the foster family convince her to take both of these puppies home for a day or two in order to decide which one she'd keep? LOLOLOL! Are you kidding me? After a mere few hours with both of these creatures, she was in love with both of them. Duh. I could have told her that was going to happen! So here she is the new mommy to these cute things. They're both one of those cool mixed breeds of hypo allergenic dogs. The puppy on the left is a terrier type mix and is named Chestnut and the Shih Tzu mix on the right is named Oreo.
I helped her take them to the vet this morning for some shots and had so much fun snuggling them. Two words: Puppy Love.
Posted by Christine at 1:45 PM