REVIEW: My Soul to Lose by Rachel Vincent

This is the novella prequel to Rachel Vincent's new young adult series called Soul Screamers. It is currently available as a FREE audiobook on audible.com and a FREE Kindle ebook at amazon.com that can be downloaded to your Kindle or to your iPhone Kindle App. (The iPhone Kindle App is available free at iTunes). 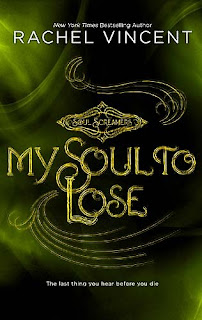 Book blurb:
It was supposed to be a fun day, shopping at the mall with her best friend. Then the panic attack started and Kaylee Cavanaugh finds herself screaming, unable to stop. Her secret fears are exposed and it's the worst day of her life.

Until she wakes up in the psychiatric unit.

She tries to convince everyone she's fine--despite the shadows she sees forming around another patient and the urge to scream which comes burbling up again and again. Everyone thinks she's crazy. Everyone except Lydia, that is. Another patient with some special abilities....

The book blurb accurately explains to what takes place in My Soul to Lose. The story is the prequel novella to the Soul Screamers series, and is best read if you intend on continuing with the series as it is akin to a several chapter prologue to the next novel.
My Soul to Lose is a story of the awakening of Kaylee's ability to sense death or the shadows that appear around someone before they die. It starts as a panic attack, but soon she feels despair and fear deep in her soul. And as much as she tries to resist the urge to scream, she can't fight it and its as though her vocal cords take over on their own and she can't help but scream.

My Soul to Lose is an introduction to Kaylee and her "curse" and has established a premise to what sounds like a very interesting series. I felt empathy for Kaylee--knowing what she experiences is very real, but also knowing no one would believe she sees and feels shadows of death. I hope that in the next book she finds some answers to what she experiences, is able to take command of it, and possibly use her ability to help people. I plan on continuing Kaylee's story with My Soul to Take, the first full length novel to the Soul Screamers series by Rachel Vincent.

My Soul to Take My Soul to Save
Published August 1, 2009. Available January, 1, 2010
AVAILABLE NOW.
Visit author Rachel Vincent at http://www.rachelvincent.com/

My first audiobook experience:
I downloaded the audiobook of My Soul to Lose about three weeks ago onto my iPhone from audible.com and finally listened to it this morning. As this was my first time listening to an audiobook, I wasn't really sure what to expect or if I'd even enjoy listening to a book when I could be reading it. I ended up listening to the first few minutes of the book three or four times. At first I found it disconcerting, I think in part because I had to get the character names straightened out in my head. I had to hear the names a couple of times and who was what character... the main character, the friend, the boyfriend, the cousin, and so on. It's not that the story is confusing at all, but rather I needed it repeated a couple of times so I got my bearings. It was entirely my own issue, I think, after being so used to reading names that get imprinted in my mind immediately as opposed to hearing them and them not sinking in.

Then once I repeated the first few minutes a couple of times, it took a few minutes for me to get used to the narrators voice and her rhythm. I don't think it was more than five minutes and the narrator successfully brought me into the story and I was listening with the same concentration and comprehension that I would have if I were reading it myself. I have to say, I really enjoyed my first audiobook experience and I'm definitely open to listening to more audiobooks in the future.

I'll also add that listening to an audiobook is really conducive to multitasking, too! I weeded my entire front and side yard landscaping while listening to the book. At one point I was so into the book, that one scene made my eyes tear up and it took me a second to realize I couldn't see the weeds at my finger tips. ;)
Do you listen to audiobooks?
Posted by Christine at 5:54 PM