REVIEW: MY Soul to Take by Rachel Vincent 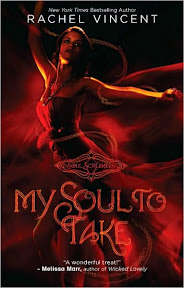 When Kaylee Cavanaugh was very young, she and her parents were in a serious car crash that took her mother's life. Shortly thereafter, Kaylee's father moved to Ireland, leaving Kaylee in the care of her Aunt Val and Uncle Brendan. Kaylee's aunt and uncle have lovingly raised her alongside their own, slightly younger daughter, Sophie. Now both in high school, Kaylee and Sophie aren't very close, and in fact don't really get along at all. Sophie is on the school dance team, hangs out with the popular crowd and is basically more the high maintenance, spoiled kind of girl. Kaylee is simply just . . . average. Average, that is, until she starts having inexplicable panic attacks that drive her to want to literally scream.

In My Soul to Lose, the novella prequel to My Soul to Take, Kaylee had a panic attack in the mall that ended in disaster. She was overcome by fear and despair and then noticed dark, moving shadows surrounding a young, sickly boy in a wheelchair. Kaylee desperately tried to fight the overwhelming urge to scream but in the end, she lost the fight and the screams just let loose from her vocal cords. Her screaming completely consumed her and she couldn't stop. She ended up admitted to the mental ward of the hospital where she was sedated to stop her screaming. Kaylee stayed in the hospital for a whole week for treatment and counseling before her uncle couldn't take it anymore and had her released.

My Soul to Take picks up six months later when Kaylee starts having these panic attacks once again. Kaylee and her best friend, Emma sneak into a club for a fun night of dancing, and Kaylee catches the attention of one of the most winsome guys in her school, Nash Hudson. She's having fun dancing and flirting with Nash, when all of a sudden, Kaylee starts to lose her composure, sensing the onset of another one of those panic attacks. Kaylee notices dark shadows around a beautiful young woman in the club and once again, she starts fighting the overwhelming urge to scream. Emma comes to her rescue and tries to whisk Kaylee away from Nash in order to save her from humiliation if she starts to scream, but Nash is worried for Kaylee and insists on following them out of the club. Outside, Kaylee is still panicking and desperately trying to resist screaming. Surprisingly, Nash doesn't freak out over Kaylee's behavior at all, and in fact, he holds her and soothes and calms her by singing softly to her. In a moment of unguarded honesty, Kaylee tells Nash about her panic attacks, the dark shadows and her uncontrollable need to scream. He doesn't seem shocked or disgusted, and in fact is kind and understanding. He even wants to see her again.

The next day, Kaylee sees on the news that the girl from the club who triggered her panic attack died later that night. She starts to realize that she gets these panic attacks when someone near her is about to die. When a second young girl is found dead, and then a third girl from Kaylee's own school dies right in the school cafeteria during lunch, she's all but freaking out over her ability, convinced that she has a brain tumor that causes her strange and frighteningly accurate premonitions of death. Not being able to wait for her aunt and uncle or her father to explain the truth to her, Nash steps in and helps Kaylee understand her new found ability. She learns that she is a bean sidhe, which is very similar to the mythological banshee that screams for the soul of a dying person. She also learns about the existence of reapers and other supernatural beings of the Netherworld.

Convinced that the deaths of these healthy, young women are not a coincidence, Kaylee and Nash begin investigating the unexplained deaths in hopes of finding a way to stop them. But there are consequences with interfering with life and death, and Kaylee and Nash are challenged not only by those dangers, but also by the morals of right and wrong. In addition to solving the mystery of the girls' deaths, a slew of Cavanaugh family secrets are revealed throughout the story. Some secrets provide Kaylee with answers she's always been looking for and others seem to just lead to more questions.

My Soul to Take is a serious, somewhat melancholy story of Kaylee Cavanaugh's discovery of her bean sidhe heritage and how she learns to come to terms with it while thrown into solving the mystery of unplanned deaths. It's not a depressing story, but when death is a prevailing theme, the story does take on a serious tone. The relationships in the novel are all very realistic and easy for teens to identify with. There's "sibling" rivalry between Kaylee and Sophie, unconditional friendship between Kaylee and Emma, and a budding romance between Kaylee and Nash that is sweet and tentative. Kaylee's relationships with the adults in her life are also very important throughout the story and add a lot of emotional depth to the novel as well. 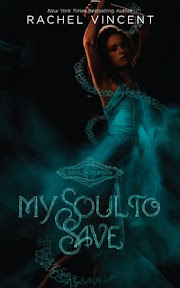 Author Rachel Vincent has crafted a well written urban fantasy young adult novel by combining realistic, normal teenage relationships with the creative reworking of banshee folklore and a suspenseful mystery that will keep readers flipping the pages until they reach the end. My Soul to Take is a tense and emotional read that ends with satisfying closure, but will definitely have readers looking for more stories in this fascinating world. Thankfully, Rachel Vincent has more in store for Kaylee and Nash in the second Soul Screamers story titled My Soul to Save to be released in January 2010.

You can visit Rachel Vincent on her website at http://www.rachelvincent.com
Posted by Christine at 1:04 PM