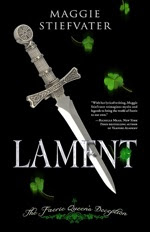 From the inside cover:


Sixteen year old Deirdre Monaghan is a prodigiously gifted musician. She's about to find out she's a cloverhand--one who can see faeries.
Unexpectedly, Deirdre finds herself infatuated with mysterious boy named Luke who enters her ordinary life, seemingly out of thin air. But his interest in her might be something darker than a summer romance. When a sinister faerie named Aodhan shows up with deadly orders from the Faerie Queen, it forces Dee right into the midst of Faerie. Caught in the crossfire with Deirdre is James, her wisecracking but loyal best friend.
Deirdre had been wishing her summer weren't so dull, but taking on a centuries-old Faerie Queen isn't exactly what she had in mind.

Lament is author Maggie Stiefvater's debut novel and is simply phenomenal. The story is beautifully written, simultaneously elegant and down to earth. The descriptions of Deirdre Monaghan's world and the curious, beautiful and frightening world of the fae into which she gets thrown come to life right off the pages of the book, immersing the reader full force into the story.

Lament is an engaging story of family, friendship, love and self discovery that griped me from the very first pages and swept me along to the very end. It's a coming of age story for the somewhat introverted and seemingly ordinary Deirdre Monaghan in which she learns her extraordinary place in a dark and whimsical world of Faeirie.

The family relationships between Deirdre, her mom, aunt, her grandmother are seemingly normal, but as Deirdre learns more about herself and the world she lives in, she also gains a greater understanding of the relationships between the women in her family that will change her life forever.

In addition to Deirdre's new found understanding of her familial relationships, she also learns some valuable lessons in friendship. Deirdre's friendship with her long time best friend James experiences some subtle shifts when she becomes infatuated with Luke. She also learns a surprising lesson or two from a new friendship that is almost unintentionally forged between her and Sara--her socially polar opposite classmate and co-worker at Dave's Ice.

Deirdre becomes infatuated with Luke almost as soon as she meets him; he's handsome, charming, and has a musical talent that near matches her own. Luke is fascinated by Deidre and can't help but want to keep company with her, even though he has come into her life for hidden reasons. What I really liked about the love story component of Lament, is that Deirdre doesn't ever mistake infatuation for love. While of course she craves his company and affection, she is rightfully cautious, as there is something dark and dangerous surrounding Deirdre ever since Luke Dillon came into her life.

Maggie Stiefvater has wonderfully crafted a Faerie tale deeply rooted in folklore and strongly connected to the beauty and power of music. The Faerie in Lament are a perfect blend of whimsical and dark and dangerous. Not entirely good or evil, the Faerie are of their own morality and are as elemental as nature itself and equally unpredictable. Lament is a compelling tale of the dark, yet beautiful lures of the Faerie world with the sweet innocence of a forbidden love.

Ballad: A Gathering of Faerie is Maggie Stiefvater's next novel set in this gripping world and is to be released on October 1, 2009. my birthday! : )

Check out the beautiful book trailer for Ballad, made by the incredibly talented Maggie Stiefvater. And I mean she "made" it in the truest sense of the word. She drew the "story boards", composed and performed the music, and compiled the video herself. I love this trailer. The music and the imagery is mesmerizing.

Shiver by Maggie Stiefvater is currently #3 on the NYT Bestseller list for children's fiction!
Shiver is Ms. Stiefvater's second full length novel, a romantic tale of a teenage girl and the wolf who has watched over her for years who changes to a boy with the change of seasons. Shiver hit bookshelves on August 1, 2009.
Posted by Christine at 2:32 PM