REVIEW: Wed Him Before You Bed Him by Sabrina Jeffries

The School for Heiresses Series, Book 6 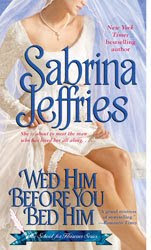 Wed Him Before you Bed Him is the sixth and final installment in The School for Heiresses Series by author Sabrina Jeffries and can be read as a stand alone novel. I hopped on this series starting with the previous installment, Don't Bargain With the Devil, and while I thought it was an enjoyable read, it did not overly impress me. What it did do, however, was pique my interest in the school's founder, Miss Charlotte Page Harris and her anonymous benefactor known only to her as "Cousin Michael."

From the back cover:

At eighteen, Charlotte Page made a life-altering mistake. She wronged a man in an impulsive act that she came to deeply regret, though it led her to her present life as Mrs. Charlotte Harris, owner of Mrs. Harris's School for Young Ladies. Unbeknownst to her, that man is now her anonymous benefactor, the mysterious "Cousin Michael." His masquerade began as preparation for a devastating revenge, but became a labor of love. Now Charlotte desperately needs his help. Can he save her from disaster as his real self without revealing the ugly secret behind his charade? Or will the mistakes of both their pasts tear them apart forever?

Over the fourteen years since the inception of Miss Harris' School for Heiresses, Charlotte and her benefactor, Cousin Michael communicate only through a regular exchange of letters via a personal solicitor. Charlotte and Cousin Michael have had professional discussions, friendly chatter, flirtations, and disagreements. At the end of Don't Bargain With the Devil, Cousin Michael became angry with Charlotte for her repeated attempts at determining his true identity and has stopped returning her letters.

For some great insight into the relationship between Miss Charlotte Harris and the mysterious benefactor, "Cousin Michael," I highly recommend you spend a few minutes at the author's website reading snippets of the letters they have exchanged over the years at this link: http://www.sabrinajeffries.com/index.cfm?fuseaction=heiress&pageID=4. The letters also give a little background information about some of the other characters, a little bonus if you are reading the novel as a stand alone.

At the start of Wed Him Before You Bed Him, the school is once again in dire straits as there are plans to build a racetrack on the estate adjoining the school, which would be the social and economical ruin of Miss Charlotte Harris' School for Heiresses. Charlotte is in desperate need of Cousin Michael's advice and finances, but he has not been returning her letters. In the meantime, Charlotte is approached by Lord Kirkwood, the widower of one of Charlotte's former students who died recently and left a large sum of money to the school. One would think this a blessing, but there is a stipulation that the money be used to build a new school in another location and the project must be overseen by Lord Kirkwood himself. This throws Charlotte for a loop, because not only does she not want to move the school, but can't even authorize such a thing without her benefactor's approval anyway and he's not answering her letters.

At the beginning of the novel, the reader finally gets a detailed look into Charlotte's past and learns about some lost loves and some life altering decisions she had made that eventually led to her financial ruin. While she may regret some choices she made when she was young, she's mature enough to know that wallowing in the past won't change anything and she does her best to make a better future for herself and help others learn from her mistakes through her school. I came to admire Charlotte very much in this story. Her life has taught her to be strong, smart, and giving.

Cousin Michael's identity is finally revealed in the novel, and it should be no surprise to readers of this series, that they fall in love. They have all kinds of obstacles to overcome, including plots of revenge, anger, misunderstandings and a many regrets. They also have great chemistry, beautiful passion for each other, a mutual longing for having done things differently, and a maturity that only life experiences can bring, all of which bring them together as they come to realize that second chances are sometimes the greatest of gifts. Then it's honesty and true love that finally binds them together forever. An engaging, mature love story and an excellent conclusion to a series.
Posted by Christine at 4:24 PM