Blueberries, Braces and a Birthday!

Maria is at sleep away camp this week, so I'm trying to plan special mommy-daughter things to do with Anna every day so this week is a little special for her, too. Monday we went to see the Kit Kittredge movie. So many of the girls in the theater brought their doll with them to watch the film, including us. It was very cute and the movie was very good.
Yesterday, Anna and I went blueberry picking at a local farm. [ And yes, for all you wise crackers, there are farms in NJ... its not just all the industry and dockyards you see from the plane at Liberty Airport, a.k.a Newark Airport or from watching The Sopranos. We are the Garden State after all. Um, gee. Defensive much? lol ;) ]We picked about 4 lbs. of blueberries in about 45 minutes. We would have stayed longer to get enough berries for homemade jam, but it got really hot and we started melting. Hopefully we won't eat them all right out of the fridge before I have time to make a yummy treat out of them. I'm thinking homemade blueberry ice cream or a blueberry tart with vanilla ice cream.
Here are a few shots of my Anna in the blueberry field.  Can you see the bushes loaded with blueberries? The branches were literally sagging to the ground with ripened fruit. 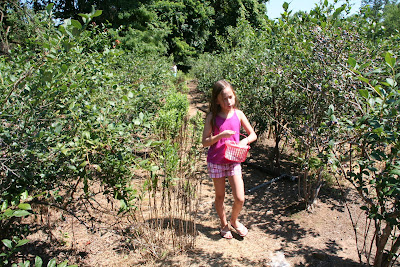 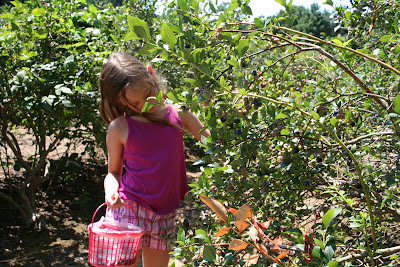 Today, I took her to the orthodontist to get her braces put on. See? Something special every day. Okay, so this one isn't her favorite outing so far this week. Not mine either. Now both my girls will have braces for the next year and my monthly payment to the orthodontist is now $310 and that's even after the deductible. *cry*  I did get her a happy meal and a $1 sundae on the way home, though. That's special! :)
I would love to post a picture of her with her new braces-she looks quite adorable, but still won't let me take a picture of her. When we got home, she checked herself out in the mirror and turned to me with a small smile and said, "I'm pretty." Isn't that so sweet? It really made my day. She is a big worrier (I mean, big!), and I imagine braces are a tough thing for a young one to handle. They can be uncomfortable and obviously there's this whole thing about appearances. So to hear her say something so positive about herself in a situation like this was music to my ears.
This afternoon I am baking my father in law a birthday cake. He is 83 years old today! Isn't that awesome? [Remind me how awesome that is the next time I complain about turning ffff fffforty later this fall, k?] He was a teenager in the Philippines during World War II and hid from the Japanese in the mountains with his parents and 10 brothers and sisters, along with several cousins. It was there in the forest, when he and one of his brothers decided to take a days walk to a village to try to buy some sugar for their mother, that he stepped on a Japanese land mine that exploded and imbedded shrapnel in his eyes for a few weeks before he got medical attention and rendering him legally blind. The stories of what he and his family did to survive are simultaneously heart wrenching and uplifting. The reverence he still holds for the United States forces for coming to rescue the Philippines from Japan during that time are inspiring. It is no wonder, really, that thirty or so years later he immigrated to the US with his wife and only child (my husband) and wholeheartedly embraced becoming an American citizen. My mother in law passed away about a year and a half ago and so due to his near blindness and a debilitating stroke he had in 2000, my father in law now lives with us so we can take care of him. While I know he is happy to be with us, I also know he misses his wife terribly (she died the day before their 45th wedding anniversary), so I'm trying to make this birthday a sweet day for him. Figuratively and literally.
I think his favorite graham cracker cake with the whipped cream and banana filling will do the trick! :D
Posted by Christine at 4:46 PM